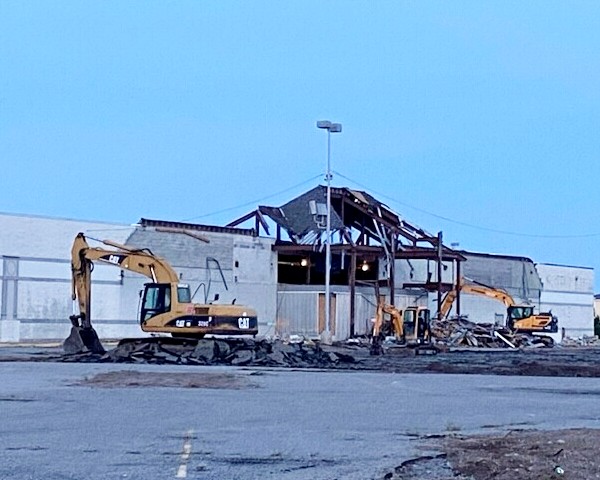 July’s business comings and goings on the Outer Banks and in northeast N.C.

Editor’s note: As part of our commitment to “Covering The Business News of the Greater Outer Banks”, WOBX will be updating this story on a regular basis with information on businesses that are getting rolling, those that are unfortunately having to call it quits, updates on staff, manager and owner changes, and other similar information. Feel free to submit announcements and tips, and make sure to include photos, to news@wobx.com.

Demolition of the facade/entrance of the old Kmart in Kill Devil Hills is underway, as work begins to renovate the 110,000 square foot building into a much-anticipated Target that is expected to open in 2023.

The old 7-11 in Grandy has been torn down, and site work is getting underway for North Carolina’s first Royal Farms convenience store. The site plan calls for a 5,300 square foot store with fuel pumps and 67 parking spots, on the southeast corner of the intersection of Caratoke Highway and Walnut Island Boulevard.

Elizabeth City leaders recently approved zoning and other changes that will pave the way for a Royal Farms to be located on Halstead Boulevard Extended near Walmart.

The popular independent book store has left downtown Elizabeth City and now has a new home, as Page After Page has moved to the Shops at Kenyon Bailey on McArthur Drive.

There’s sad news to report over the weekend from the popular Colington Pizza.

More real estate moves in downtown Elizabeth City, as the owners of Harbor Centre at the corner of Water and Main streets, the mother/daughter duo of Dana Rabon and Carlee Goldston, purchased The Waterworks Building at the east end of Ehringhaus Street in June.

Renovations at The Waterworks are underway, and several new tenants have signed on to move-in to both properties soon.

On Wednesday, Rabon and Sy Davis revealed the name of the restaurant they plan to open soon that will replace Groupers in The Waterworks Building:

You can keep up with the latest happenings on their Facebook page.

Myra Ladd-Bone, Chairman of the Chamber Board and Broker at Atlantic Realty congratulated the owners: Matt Khouri, Leah Sites, and Scott Lawler for the grand opening and new ownership of the business.

“Kind Yoga is a co-operative wellness studio providing an organized space for teachers who offer heated and cool temperature classes, musicians, meditation practitioners, reiki, and alternative healers to offer their goods and services to the Outer Banks,” Ladd-Bone said.

Rivershore Outfitters, Mildred’s Florist and Gifts and The Lodge

Three businesses in Elizabeth City will soon be in a new, combined location at 417 South Hughes Boulevard.

It’s been quite some time since anything has occupied the building on the southbound side of U.S. 17 between Macarthur Drive and Halstead Boulevard.

Rivershore Outfitters, a locally-owned hunting, fishing, and apparel store currently located at the corner of West Ehringhaus and Selden streets has launched a Moving Sale with 20 percent off everything except guns and ammo.

Mildred’s Florist and Gifts is at 710 West Ehringhaus Street, also at the corner of Selden Street, and specializes in floral arrangements and gift shop items. They offer delivery in Elizabeth City, Camden, South Mills and Weeksville.

As far as The Lodge, owner Jonathan Watts said the building has an amazing bar inside, and they want to play off a hunting theme with the name.

“Rather than take it out and make it retail space, we are going to bring in different food trucks daily and people can eat inside if they’d like,” Watts said, adding they will also have outdoor seating.

“We will serve drinks, including draft beer, and desserts plus hand scooped ice cream,” Watts said.

Plans are for Rivershore Outfitters, Mildred’s and The Lodge to open in August. 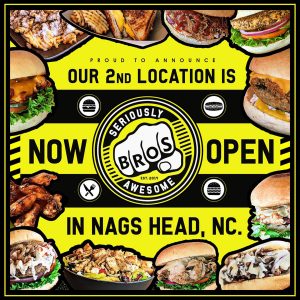 The “Seriously Awesome!” sandwich and burger spot on Hatteras Island has opened a second location on the northern beaches.
Bros got started by a pair of brothers born and raised in Texas who worked in kitchens on the Gulf Coast, North Texas, and eastern Tennessee, in every concept from fine dining to fresh seafood and barbecue. While vacationing on the Outer Banks in the summer of 2014, the Bros learned of an opportunity to open a restaurant. A 750-mile journey, followed by a night sleeping on the beach, led to a handshake deal and Bros soon opened at the Food Lion shopping center in Avon.

The new store is at The Outlets in Nags Head, 7100 South Croatan Highway, and the original is at 41934 Hwy 12 in Avon. Find them online at BrosSandwichShack.com

Construction and demolition have begun at three different sites in Currituck County for a trio of popular regional and national chains.

In Grandy, work has started on the first Royal Farms convenience store in North Carolina.

Founded in 1959 and headquartered in Baltimore, Royal Farms has more than 200 stores located in Maryland, Delaware, Virginia and Pennsylvania.

Royal Farms is best known for what they call their “World Famous Fried Chicken – Always Fresh, Never Frozen” that’s available 24 hours a day, along with breakfast sandwiches and other fare.

The site plan calls for a 5,300 square foot store with fuel pumps and 67 parking spots, on the southeast corner of the intersection of Caratoke Highway and Walnut Island Boulevard.

Construction is underway in Moyock on a 4,650 square foot 7-11 that will include 10 fuel pumps at the corner of Caratoke Highway and Baxter Lane. The developer is Creighton Commercial Development of Fort Meyers, Florida. A tentative grand opening date has been set for September 29.

And contractors for WEDG Development, LLC, of Nags Head, are now on site to build a 6,218 square foot building just down N.C. 168 at 383 Caratoke Highway in Moyock. It will include a Dunkin’ in 1,800 square foot and a pair of additional 2,100 square foot spaces. Information on the other two tenants was not yet available.