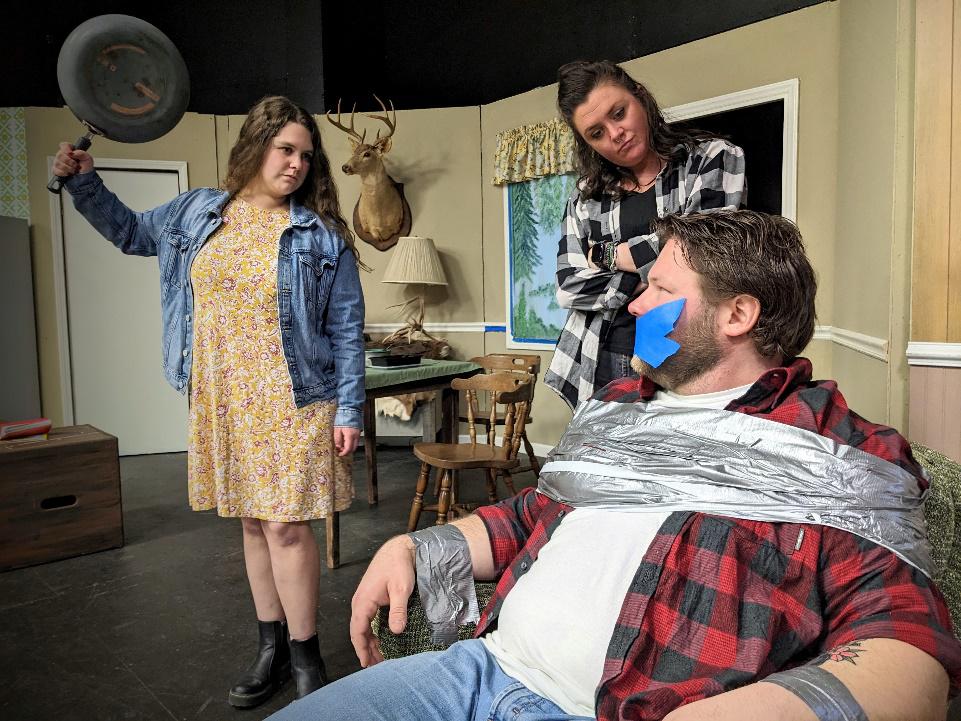 Revenge is sweet in Theatre of Dare’s ‘Exit, Pursued By A Bear’ opening Friday

Domestic abuse is a deadly serious subject. But in Theatre of Dare’s upcoming production of Exit, Pursued By A Bear, payback is a laugh.

The play tells the story of Nan Carter (Emily Gomez), a north Georgia woman who concocts a comically elaborate plan to teach her abusive husband Kyle (Tyler Hudson) a lesson.

Enlisting the help of best friend Simon (Evan Tillett) and aspiring actress/part time stripper Sweetheart (Brandy Hayes), Nan duct tapes Kyle to his recliner and forces him to watch reenacted scenes from their painful past. As a finale, she plans to cover their mountain home with venison and honey, luring nearby bears to come make a meal out of Kyle.

“The play succeeds because it never makes fun of Nan’s plight,” says Gomez. “Instead, the comedy occurs when the three friends come up with increasingly outrageous and theatrical ways to antagonize and mock Kyle. It’s pretty much 9 to 5 meets the Dixie Chicks.”

Given the subject matter of the production, Theatre of Dare teamed up with Outer Banks Hotline, a local non-profit organization that provides support and shelter for victims of domestic violence, sexual assault and human trafficking. Information on the organization will be available at the theater throughout the show’s run, and all proceeds of the January 26 performance will be donated to Hotline.

Exit was written by Lauren Gunderson, who has recently become one of America’s most produced playwrights. The title comes from a stage direction in William Shakespeare’s The Winter’s Tale, and because of that, the audience will see some of Exit’s stage directions projected on Kyle’s big screen TV.

“Dark comedies always have to walk a fine line, but this one does it exceedingly well,” says director Tim Hass. “Through the use of flashbacks and monologues, we see the journeys all four of these characters have taken to get to this point. I think audiences will find the show both hilarious and thought-provoking.”