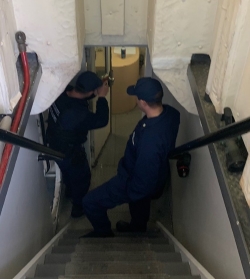 State and federal law enforcement agencies trained Tuesday on how to respond effectively to an emergency aboard a state ferry in Hatteras Inlet.

The training included a simulation of the law enforcement and emergency response to an active shooter incident, as well as treating victims of a mass casualty incident. Tuesday’s training, which was conducted aboard the M/V Frisco, was part of a series of required trainings aimed at ensuring emergency response teams know how to conduct a coordinated and timely response to a major incident on a ferry. A similar training exercise was held on the Neuse River in October.

Participating in the training were officials with the U.S. Coast Guard, North Carolina State Highway Patrol, the N.C. Department of Transportation’s Ferry Division, the N.C. Wildlife Resources Commission and the N.C. Division of Marine Fisheries.

There were no passengers aboard the ferry and there was no interruption to ferry operations.