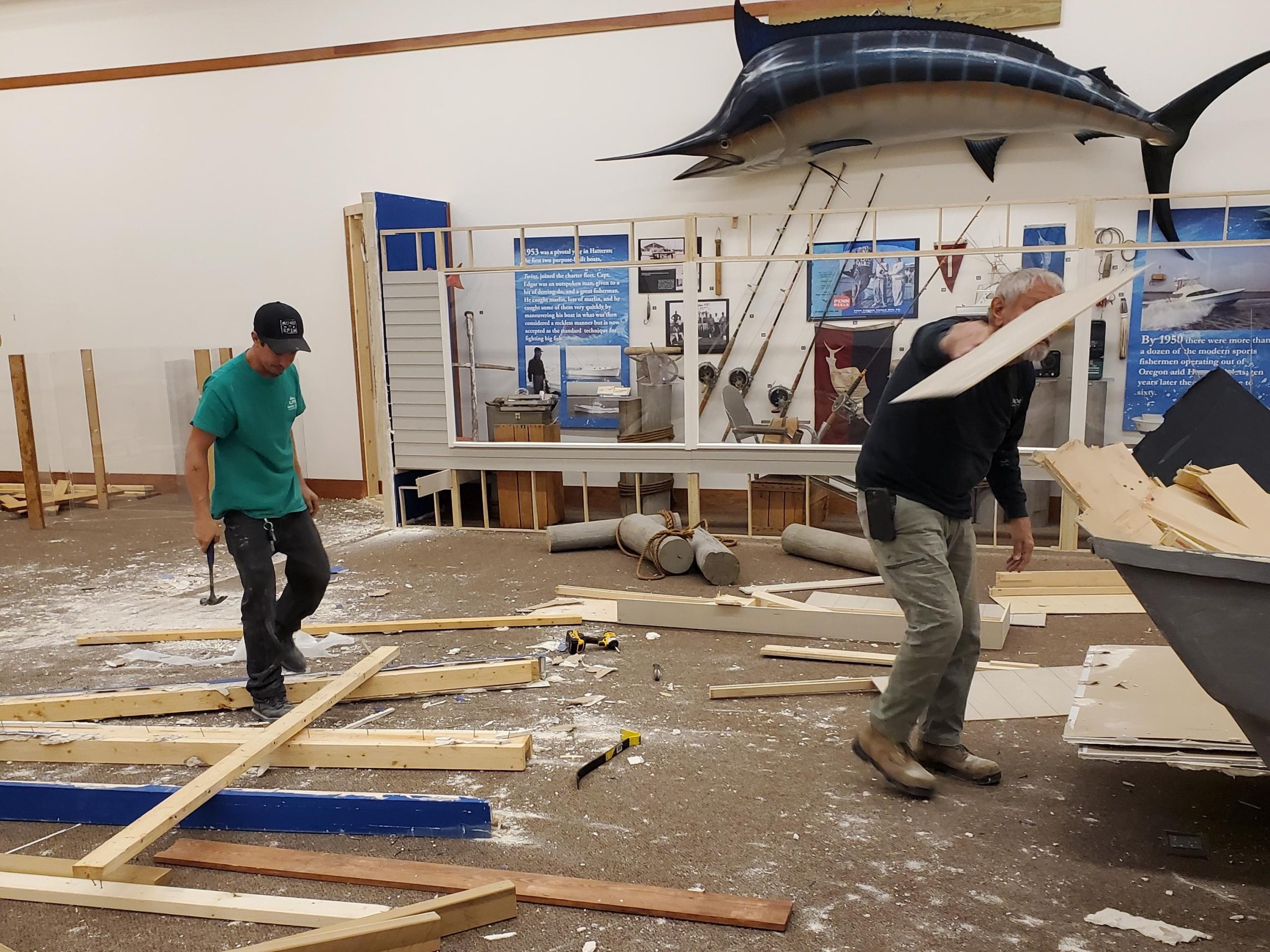 ‘It’s a whole new beginning’; Graveyard of the Atlantic Museum is undergoing a transformation

The Graveyard of the Atlantic Museum is in the middle of a transformation.

The Hatteras village landmark, (which first opened in 2002), was slowly but continually stocked with new exhibits over the past 20 years, but as of early December 2022, the 7,500-square-foot space was a blank slate.

“The galleries are absolutely empty right now,” said Melanie Schwarzer, member of the Friends of the Graveyard of the Atlantic Museum. “The only thing left at the moment is the Cape Hatteras Lighthouse lens in the lobby.”

“It was hard watching it all being taken apart, after all the years and money and everything we put into it,” she added. “But it’s a sign of good things to come.”

The museum is in the last stages of a massive renovation project that has been in the works for years.

Though the prospect of a remodel had been floating around for some time, in May 2021, the museum received a $4.1 million grant from the N.C. Department of Natural and Cultural Resources to conduct an overhaul of the Hatteras village site. Months later, Dare County and the Outer Banks Visitors Bureau stepped in with an extra $500,000 in funds, which the state then bolstered with an additional $400,000, resulting in a total of $5.1 million to bring the remodeling project to life.

Construction bids started in late 2021, and a contractor was selected in June 2022, with the initial plans unveiled to the museum team in September.

That same month, staff members of the Graveyard of the Atlantic Museum began the slow and intricate process of removing exhibit displays and storing hundreds of artifacts to prepare for the actual renovation work to come.

“Our staff was fantastic,” said Joe Schwarzer, Director of the North Carolina Maritime Museum System. “After the September meeting, we immediately mobilized to break everything down and get it stored, and we had everything done and ready for reconstruction by December 2 – six weeks ahead of schedule.”

Construction on the “new” museum space is now imminent, and when visitors return to the museum in the summer of 2023, it will be an entirely new experience.

“Up until now, the exhibits there were kind of cut and paste,” said Melanie Schwarzer. “They went up whenever we could afford to add them and find materials for the display. Now, everything is going to be planned out.”

The footprint of the museum, which includes 5,500 square feet of gallery space and 2,000 square feet of lobby space, will remain the same. But the exhibits and displays themselves will evolve in a way that will effectively double the number of artifacts that can be shown in any given year.

In the new design, exhibits will be able to be rotated every six months or so, with treasured artifacts coming out of the secure and on-site storage area to be showcased in interactive displays.

“The exhibits are changing completely and will be structured in a way so we can rotate more freely. We’ll have things on display in six-month intervals, so that the museum is always fresh and new,” said Joe Schwarzer. “We’ll be able to share all the things that people have donated that we haven’t been able to display yet, which is going to be great.”

There are some new additions planned for the museum as well.

For one thing, the museum will be showcasing a WWI-era Krupp gun on the front porch, (a German naval gun donated to the museum by Josephus Daniels), greeting visitors with a nod to the Outer Banks’ wartime history.

For another, the museum recently received an extensive collection of WWII-era U-boat artifacts, which were literally driven across the country by owner Jemison Beshears of San Francisco, California.

“This collection is stunning and has [artifacts] that are directly related to the Outer Banks, and which reference the entire U-boat operation during World War II,” said Joe Schwarzer. “This collection, combined with the material that is currently on loan to us, will give us the opportunity to interpret that critical period in American history better than anyone else on the East Coast.”

The new layout of the museum and the components of the individual exhibits are planned out and ready to build, but there is still the lingering question of the 6,000-pound bronze and crystal first-order Fresnel lens from the Cape Hatteras Lighthouse.

Reconstructed in the spring of 2005 in the lobby of the Graveyard of the Atlantic Museum, it wasn’t certain until two weeks ago whether the National Park Service headquarters in Washington, D.C. would allow the lens to remain in Hatteras.

Now that the decision has been made, and the lighthouse lens will stay at the museum, it will require $80,000 to move it to a different spot within the museum space. “The cost to move the lens is not included in the budget, so that’s still a question. We are not sure if it will be moved to the gallery or not,” said Joe Schwarzer.

There’s also a question of how long the actual remodeling process will take once the construction begins.

“The worst-case scenario for the completion of everything would be August, and the best-case scenario would be the end of May,” said Joe Schwarzer. “So there’s a lot of fluidity in the schedule, and when we will reopen to the public.”

In the meantime, however, the museum will be offering a number of experiences and online exhibits on its website, with new programs expected to be launched in the weeks and months to come.

And happily, when the museum does reopen sometime in 2023, it will be like a brand-new attraction for even the most frequent and seasoned museumgoers.

“We’re still staying within our story of focusing on the Outer Banks and the maritime history, but we’ll have greater flexibility to rotate displays more efficiently, and essentially double the exhibits,” said Joe Schwarzer. “It’s a whole new beginning.”