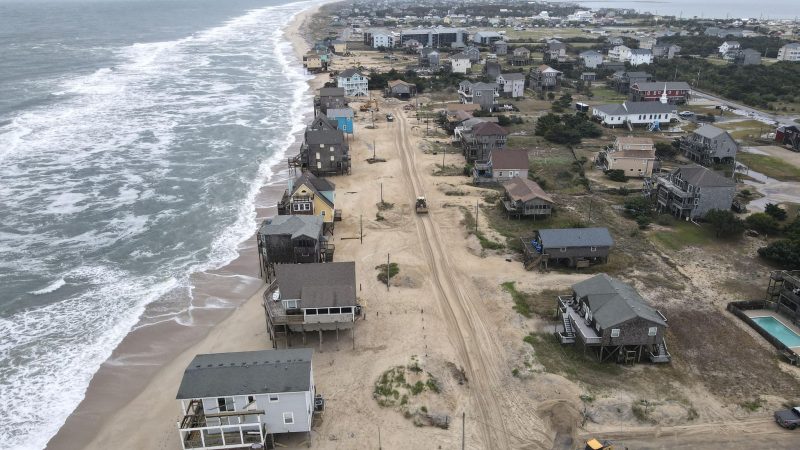 The Dare County Board of Commissioners unanimously approved taking steps toward a new Feasibility Study to determine the precise costs of performing a beach nourishment project in Rodanthe at their January 3 meeting in Manteo.

“We have a Feasibility Study from 2013, and obviously, the beach looks a little different since then,” said Barton Grover, Dare County Grants & Waterways Administrator, at Tuesday’s meeting. “So we would have a consultant or engineer go out there, resurvey the beach, and get the estimated volumes [of sand] that are being lost per year, and the erosion rate… With that, we will give you the estimated cost for a Rodanthe beach nourishment project.”

The study will begin in approximately six months, and the cost is in the $30,000-$34,000 range, with the North Carolina’s Department of Environmental Quality’s Division of Coastal Management (DCM) providing $25,000 of the funds required.

“If we do have any intention down the road of doing something – and as we’re trying to prioritize [beach nourishment] projects – we’ll have to know the scale to set those priorities,” said County Manager Bobby Outten at the meeting. “This is an opportunity for us to [have this exact information] and DCM is willing to help us.”

“It’s just one little small step to take a look and tell us what the costs are,” said Grover.

The study will be conducted by Coastal Science & Engineering, which has performed similar surveys for beach nourishment projects along the Outer Banks in the past. The results will identify the total length of a project, (likely in the two-mile range), as well as the volume of sand that would be required.

The study is an initial step in any Dare County beach nourishment project, but it does not guarantee that a nourishment project will occur. Instead, it will give the county an exact estimate of the costs involved, and will help with future decisions, if and when funds are available for additional projects.

Per a November Coastal Review Online article, Rodanthe has one of the highest beach erosion rates on the Outer Banks. Between 1998 and 2022, the average annual rate of erosion on Ocean Drive in Rodanthe ranged from 9 to 12 feet. In Buxton, (another highly eroding shoreline that was renourished in 2022), the erosion rate over that same period averaged about 6.8 feet.

“We need an updated look at the erosion rates,” said Outten after the BOC meeting, noting that while the county’s beach nourishment projects tend to cost around $10 million per mile, a Rodanthe project would likely be more expensive. “The issue we have there is that the erosion rates are accelerated, so those costs are going to be more.”

Historically, Dare County’s beach nourishment projects have taken roughly 2-5 years to come to fruition. After a Feasibility Study, applicable permits are needed to proceed, and a special tax district must be formed in order for residents in the affected area to pay for a portion of the costs. Traditionally, residents in zones that border Dare County’s beach nourishment projects pay around 50% of the total cost of the project.

“The tax base in Rodanthe is so small that it really won’t generate a significant amount of the costs – maybe a million dollars or less for what would be a $25 million or $30 million project,” said Outten.

These details and more will be covered in-depth at a January 18 meeting which will be held at the Rodanthe-Waves-Salvo Community building, and which will also be live-streamed for out-of-town homeowners.

Due to the six-month timeframe, the study’s results will not be available for the upcoming community meeting. However, an overview of the logistics and funding models that have made previous beach nourishment projects possible will be presented at the January 18 event.

“For our meeting down in Rodanthe on the 18th, [we have] a model so we can give the folks we’re talking to some idea of what we’re looking at, and what the obstacles are,” said Outten at the BOC meeting. “We obviously won’t have these real numbers by the 18th, but we’ll have a good ballpark number.”

The January 18 community meeting was scheduled after several Rodanthe homeowners voiced their concerns during the public comment period of the December 5 BOC meeting, and asked the Board to orchestrate a new beach nourishment project in the Rodanthe area.

“We’re doing this to answer questions, and to let people know how the beach nourishment fund works, and how the model works to pay for future projects and for maintenance projects that have already been built,” said Outten. “We really need to get everyone educated on beach nourishment, so you don’t have rumors and conspiracy theories floating around.”

“The whole purpose of this is to let everyone know the facts as we move forward and work towards solutions, whatever they might be.”

How to Attend the January 18 Community Meeting

The meeting will be held at 6 p.m. on Wednesday, January 18, at the Rodanthe-Waves-Salvo Community Building, which is located at 23646 N.C. Highway 12 in Rodanthe, just south of Myrna Peters Road.

Dare County Board of Commissioners Chairman Bob Woodard will open the meeting, followed by a presentation from Outten that will include an overview of the logistics and funding models that have made previous beach nourishment projects possible in Dare County.

Following the presentation, there will be an opportunity for both in-person and virtual attendees to ask questions or express their concerns. To participate virtually, attendees must register in advance.

For those who are interested in viewing the meeting without participating in the discussion, a live stream option will be available on Dare County’s YouTube channel. In addition, if anyone has comments or questions that they would like to have addressed during the meeting, they can be submitted via email to DareCountyPR@DareNC.com no later than Monday, January 16.

For those who are unable to attend or tune in on Wednesday, January 18, the video will also be available for viewing on Dare County’s YouTube channel following the meeting.