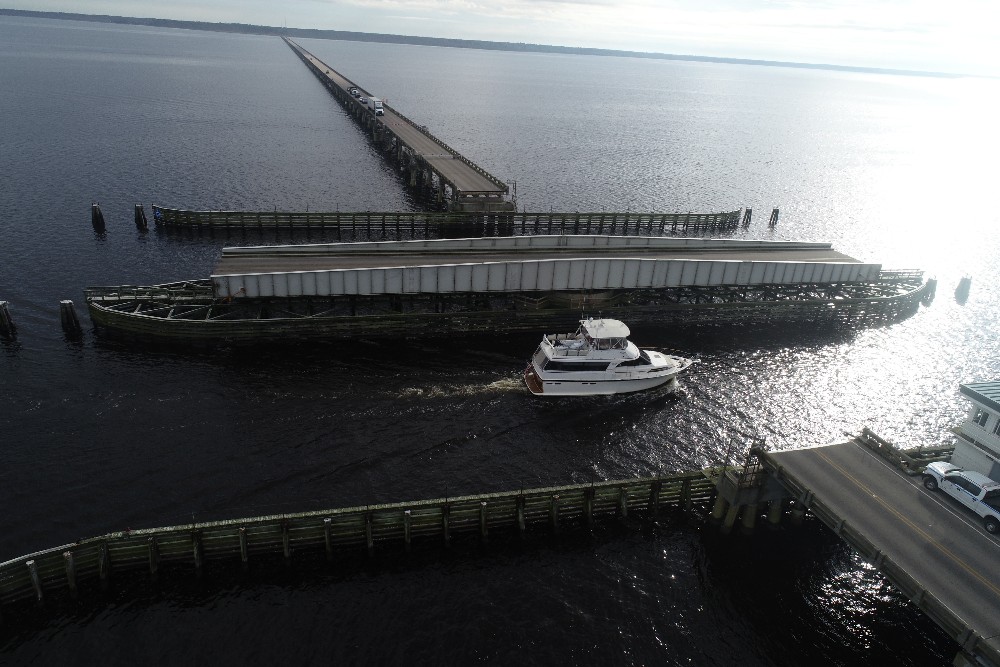 Reaction has poured in following Tuesday’s announcement that a $110 federal grant has been awarded to help pay for a replacement of the nearly six decades old drawbridge that carries U.S. 64 over the Alligator River.

The N.C. Department of Transportation says a new two-lane, fixed span bridge located north of the current Lindsay C. Warren Bridge will cost an estimated $268 million, with construction starting no later than 2025.

Here’s how local and state officials, members of the media, and others have responded to the news:

“Highway 64 and the Alligator River Bridge provide a critical ingress and egress to Dare County and the Outer Banks. Funding for a replacement has been a long time coming, and it is something that our board has advocated for over a number of years. The existing 60-year-old structure is narrow, dangerous and has become unreliable. Kudos to NCDOT for seeking the federal grant funds needed to make this project move forward, and thanks to both our state and federal legislators for all of their support.”

“Over the years our town has from time-to-time employed people who lived across the Alligator River bridge. Nags Head is also home to a number of businesses whose employees and subcontractors live on the other side of the bridge. That’s why our board has been vocal about the need for replacement. We’re certainly excited to learn that it may finally happen.”

The Nags Head Board of Commissioners have passed three resolutions since 2015 supporting the bridge’s replacement.

“This accomplishment – years in the making – is, in part, a testament to one of the great strengths continually seen at work in Dare County and among our many municipalities, our ability to speak with one voice when advocating for the common good.

We are thrilled to learn that our chorus of public comments and persistent Resolutions of support (KDH passed such measures in September 2022, November 2021, and March 2020), along with the strong case made by NCDOT in their aptly named “STERLING” application, were successful in securing this federal support.”

“I think this is great and appreciate Division 1 putting in the effort to receive the funding. I especially appreciate that they did so in memory of Sterling Baker. Any recognition that Sterling receives for his work for us all is well deserved.

So many of the employees that make the Outer Banks run live on the other side of that bridge. A lot of municipal staff depend on that bridge to get to work. These folks provide services for us all that are vital. It’s a shame that they must live so far from where they work and at the very least, they should have a bridge they can depend on to make the daily journey.”

Baker was a NCDOT engineer who passed away in April 2022. The grant proposal was named STERLING (Strengthening Transportation Evacuation Resilient Lifeline by Improving the Network’s Grid) in his memory.

The Town of Duck recognizes the vital role the Lindsay C. Warren Bridge plays in the transportation and commerce needs of the Town of Duck, Dare County and Eastern North Carolina. The Town is pleased to see that the Lindsay C. Warren Bridge replacement project was recently awarded a $110 million federal grant from the U.S. Department of Transportation as this will aid in public safety and welfare for both the Inner and Outer Banks.

The Duck Town Council passed a resolution in September backing the bridge replacement.

“We are pleased to hear the news about the improvements coming to the key feeder to the Outer Banks for our increasing number of visitors from the Raleigh-area and the rest of North Carolina.”

The Alligator River Bridge is a lifeline for the people of North Carolina both to and from the Barrier Islands. This funding is a great example of how @POTUS is helping move along large projects that will serve our state for decades to come.https://t.co/e8N04VQ5Fj pic.twitter.com/7pEFWJeuei

The $110M grant to replace Alligator River Bridge is a big win for Dare and Tyrrell Counties. I am proud to have advocated for this funding, and thank local officials in both counties for their tireless advocacy for this grant. pic.twitter.com/Vbja03Dhhu

Technically, this isn't about NC12, but it's GREAT NEWS for all of us who come and go from the Outer Banks. A replacement for the Alligator River Bridge on U.S. 64 is now one step closer to reality – thanks to a $110 million federal grant! Details here: https://t.co/EWXfJgynpX pic.twitter.com/z8ci5gssC6

An awful ride every time, especially in the dark and wind. I covered a deadly truck accident there a few years back.

NC won a $100 million federal grant to help pay for a quarter-billion-dollar bridge replacement in the Outer Banks, and the state official in charge is named WIN BRIDGERS pic.twitter.com/dnGG4QL6Y8

!!!! AND the money for the OBX bridge was announced on the same day as the season 3 premiere of the OBX show @POTUS, why were the pogues not involved in making this announcement? https://t.co/UrP5Hnculy

My first drive over Alligator River Bridge was in *dense* fog and it felt like I was driving into an abyss. I kept yelling "what is happening!"

Can someone explain why this money was spent on a bridge when it could have been spent creating a canal connecting Raleigh to the Outer Banks? Really hoping there’s another fund dedicated to canal development… @NCDOT @NCDOT_Ferry https://t.co/b6q83Yto7c