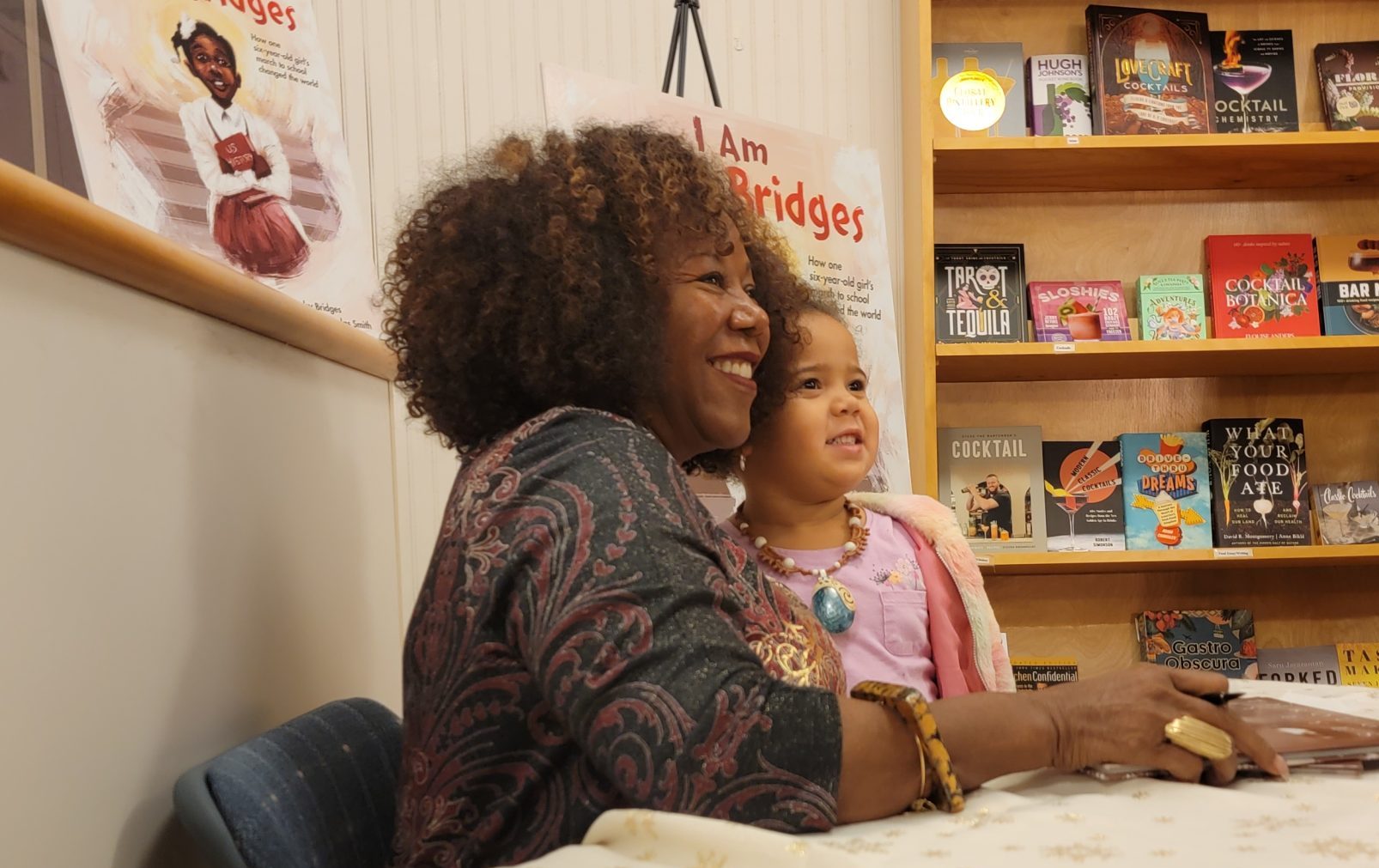 They came from near and far to Corolla village in the middle of the holiday season to meet a Civil Rights legend on the next to last day of 2021.

Educators who have taught her story in their classrooms for decades. Vacationers who booked a stay this week on the Outer Banks months ago, and who otherwise would have missed the opportunity to meet her if weren’t for last week’s storm.

It was a confluence of locals and visitors, all sharing their love of Ruby Bridges.

Originally scheduled for Dec. 23, but delayed a week due to soundside flooding and strong winds, Ruby visited The Island Bookstore as part of the second annual Corolla Christmas Village celebration.

Bridges was the first African-American child to attend an all-white school in New Orleans in 1960.

That moment of a 6-year-old girl walking through the door for the first time escorted by federal agents was immortalized in newsreels, photos in newspapers around the country, and in Norman Rockwell’s 1964 painting “The Problem We All Live With”.

All who came said in one way or another they had been inspired by a little 6-year-old girl from New Orleans who just wanted to go to school, and many shared their own stories with Ruby.

“Ruby and I are the exact same age, and I always followed the stories about her because we had integrated schools,” said Duane Clark of Corolla, and was holding books for granddaughters. “Her experience was a much different experience than where I’m from.”

Amanda and Scott Russell, residents of the Poconos in Pennsylvania, who normally spend a week on the Outer Banks in the summer. This year, they decided to spend the week after Christmas here, and when they found out Ruby was here as well, they said it was an unbelievable turn of luck.

“She is a lifelong hero, as far back as I can remember,” said Amanda, who is a librarian. “I saw the Disney version of her story as a kid and just fell in love with her.”

“Ruby Bridges means a lot to me, because she is a figure that my students can look up to,” said Chelsea Heflin Eaves, an AIG teacher in the Currituck County Schools.

“She is someone who did something so impactful and so powerful as a child, that teaching my students about her and allowing her into their lives shows them they don’t have to be an adult to change the world to do something powerful or brave,” Eaves said.

“A lot of times you work with students that you may not know what’s going on at home,” Eaves said. “She’s someone that inspires them to be brave.”

Frank O. from Norfolk made the 2 1/2 hour drive down just for the evening to meet “a hero”.

Frank O. made the drive all the way from Norfolk to Corolla tonight just to meet Ruby Bridges, and get a signed copy of her book for his 5-year-old nephew. pic.twitter.com/wX5U3T74Fw

While the weather worked out for those who came on Friday, there were some not so lucky because of the weather issues the previous week.

“My granddaughters were here last week from Raleigh, and were so excited about getting to see Ruby Bridges,” said Juli Perkins of Kitty Hawk.

Her oldest granddaughter, Vivian, had made a school project on Ruby last year and brought it with her during their trip. But alas she wasn’t able to show it to Ruby after the book signing was postponed.

But Perkins made sure the poster made it to Corolla a week later, and Ruby even autographed it.

Hundreds started lining up an hour before the doors even opened. The queue snaked from the second floor of the shop located in historic Corolla village. Then weaved through the shelves on the first floor, went out the door and along the front porch. And for much of the night, the line circled around the parking lot and weaved through the yard of Corolla Chapel next door.

Among those who made the long wait were Dare County Schools Superintendent Steve Basnight, Currituck County Sheriff Matthew Beickert and Currituck County Board of Education member Dana Parker.

While the book signing was scheduled from 6 to 8 p.m., Bridges stayed for over three hours and signed books for each and every person that stood in-line.

Many more brought their own copies of “I Am Ruby Bridges”, which was released in September and published by Scholastic. “I Am Ruby Bridges” is illustrated by New York Times bestselling artist Nikkolas Smith and is regarded as Bridges’ most personal work yet.

Others clutched copies from school libraries and their children’s or grandchildren’s book shelves of “Through My Eyes”, “This Is Your Time” and “Ruby Bridges Goes To School”, among others.

Most notable was that everyone who talked with Ruby gave her a “warm Outer Banks welcome”, and said they hope she will considering making the Outer Banks her second home.

Bridges remarked more than once that she really felt at home everywhere she has visited during what is her fourth trip in the last two years.

Conservative estimates would put the crowd at around 500. But it felt like hundreds more in one of the biggest events of its kind ever on the Outer Banks.

Susan Sawin, owner of The Island Bookstore, said her shop had sold nearly 300 copies combined of four books by and about Bridges ahead of and during the event.

That well-surpassed Pulitzer Prize winner David McCullough’s appearance nine years ago in Kill Devil Hills to promote his biography about the Wright Brothers, according to Sawin.

“The Outer Banks has been a special place for me since my first visit,” Bridges said in a statement prior to the event. “I am grateful for the opportunity to share my story with the bright young thinkers and leaders in this beautiful part of the country as we continue our work to positively impact the hearts and minds of our nation’s youth.”

“Twiddy & Company is honored to bring Civil Rights icon Ruby Bridges for a special evening on the Outer Banks, a place that is dear to her heart,” added Twiddy & Company President Clark Twiddy. “It is especially important for us to help share Ruby’s message with the next generation of youth on the Outer Banks and give them the opportunity to meet one of the most influential figures in our nation’s history.”

Earlier this month, Bridges was honored by local artist James Melvin with the unveiling of a portrait depicting Bridges during a recent visit to the Outer Banks. The painting is currently on display in the Capt. Richard Etheridge Lobby at the new College of the Albemarle building in Manteo.