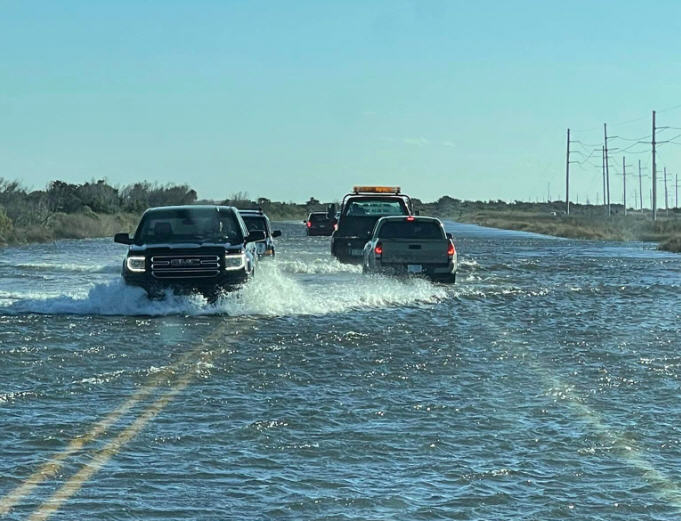 Winds steadily increased on Festivus Friday morning to near 40 mph, with gusts of 50 to 60 mph, and pushed water levels up to as much as 2 to 4 feet above ground along the western shoreline from Duck to Avon, and the entirety of Roanoke Island.

While much of the flooding happened in low-lying areas that normally see water level rises on winds from the west, there are a few spots that only flood in extreme events that are covered with a few inches to around several feet of soundwater.

Winds began to ease late in the evening, staying in the 25 to 35 mph range with gusts as high as 50, so it may be some time before the water starts to subside.

Temperatures rapidly decreased after sunset into the 20s on the beach and down to single digits inland, slick spots were reported on roads that were wet from the flooding.

Corolla
How the blow looks, and sounds, from inside the lantern room at the top of the Currituck Beach Lighthouse. Video courtesy Outer Banks Conservationists:

Duck
Water covering N.C. 12 along the Currituck Sound between Ship’s Watch and Duck Deli had started to recede late Friday evening, but the Dare County Sheriff’s Office reported ice and slush continues to be an issue in the area between Cook Drive and Ships Watch Drive. 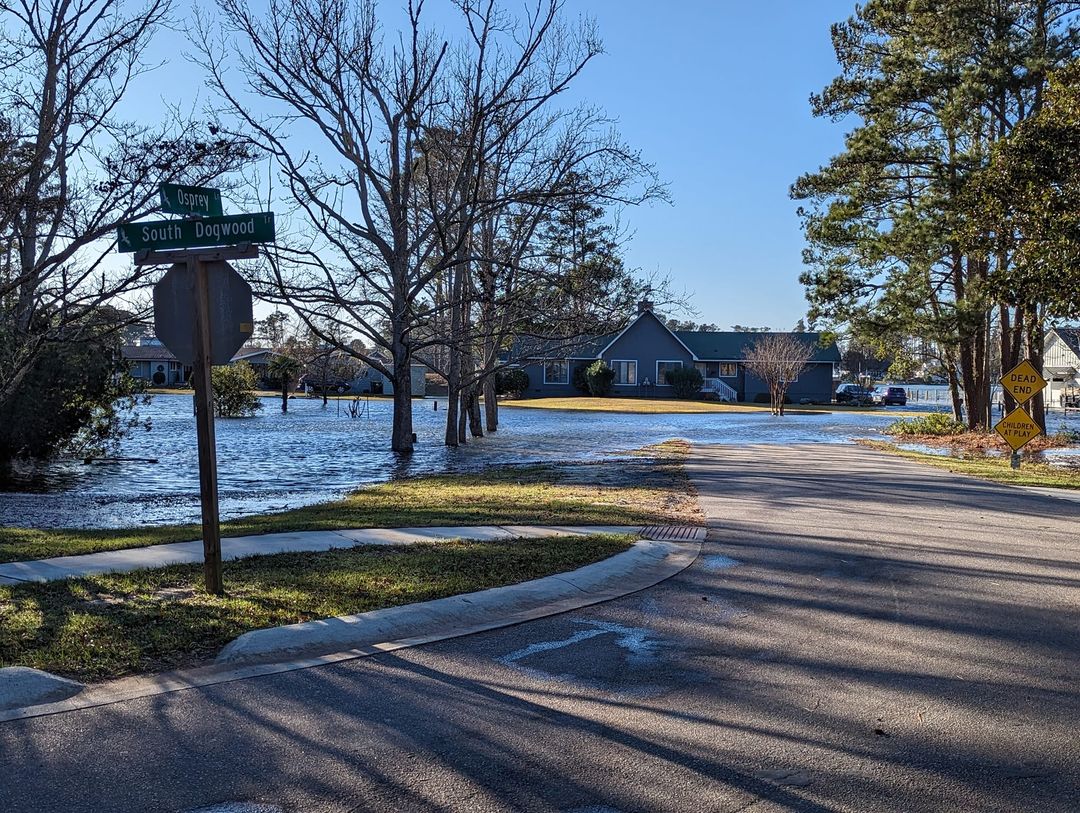 Kitty Hawk
Low lying areas along the sound in Kitty Hawk experienced flooding throughout the afternoon and into the evening.

Kill Devil Hills
Flooding reported along Bay Drive and Sportsman Drive. Both were closed to traffic. 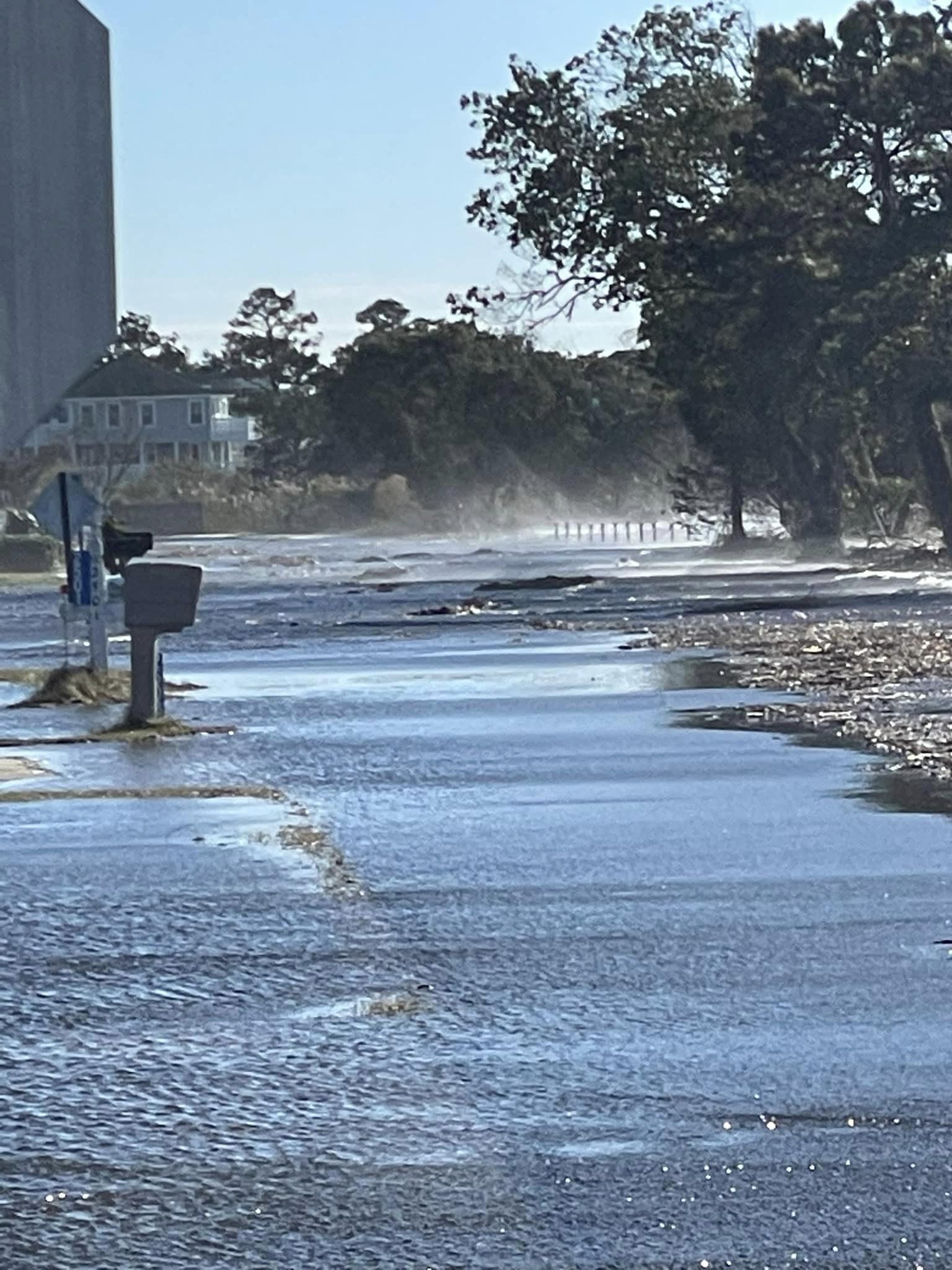 Colington Road was closed to all vehicles around 1:30 p.m. Friday due to flooding in several spots. The road reopened to high clearance vehicles around 4:30 p.m., and later to all traffic. All lanes were no longer covered by water around 8:30 p.m.

As of Saturday morning, near Blue Crab Tavern and Billy’s Seafood there was a large amount of ice and slush on Colington Road. Sand was also reported on the road in several locations.

Nags Head
Flooding and overwash was reported along Soundside Road and the U.S. 64 Causeway.

Just got back from there, the pontoon rental parking lot at the bottom of the big bridge was flooded as well, also saw these fools out on the water. pic.twitter.com/sE9WXVragP

Blowing sand was also an issue in the Jockey’s Ridge area.

Town Manager Melissa Dickerson said crews were out early this morning cleaning up debris from yesterday’s floodwaters. Most of the flood waters have subsided, but a few roads remain closed.

The roadways that are currently closed include: Fernando Street (east of Highway 64), Agona Street (east of Highway 64), and Queen Elizabeth Avenue (from Fernando Street to Sir Walter Raleigh Street). Increasing water levels were observed this morning on Queen Elizabeth Avenue, which is a great reminder as to how quickly conditions can change. As conditions change, road closures are also subject to change.

REMEMBER: Do not drive on water-covered roads or beyond a barricade. Entering a flooded area risks your life and the lives of the people that may be sent to rescue you. If you come upon a flooded street, remember to turn around, don’t drown.

The Town of Manteo has an ordinance that prohibits driving in flooded streets. Violation of this ordinance carries a $250 fine.

There is ice on the road near The Christmas Shop in Manteo as well as the other areas that flooded near by there. Mashoes Road is flooded and there is black ice along the straightaways.

When we parked in Manteo it was dry – this is less than 30min later. pic.twitter.com/eP39DmZjni

There was ice on the road early Saturday near The Christmas Shop in Manteo as well as the other areas that flooded. Mashoes Road is flooded and there is black ice along the straightaways. The main roads throughout these areas are all clear and passable with possible icy conditions.

Bodie Island
Standing water was reported on N.C. 12 between Whalebone Junction and the accessible duck blind/wildlife viewing stand parking lot, and about 1/2 mile north of the Oregon Inlet Fishing Center.

N.C. 12 reopened to traffic overnight, but the Dare County Sheriff’s Office reported there is slush, ice and blown sand in multiple places south of Oregon Inlet to Hatteras village.