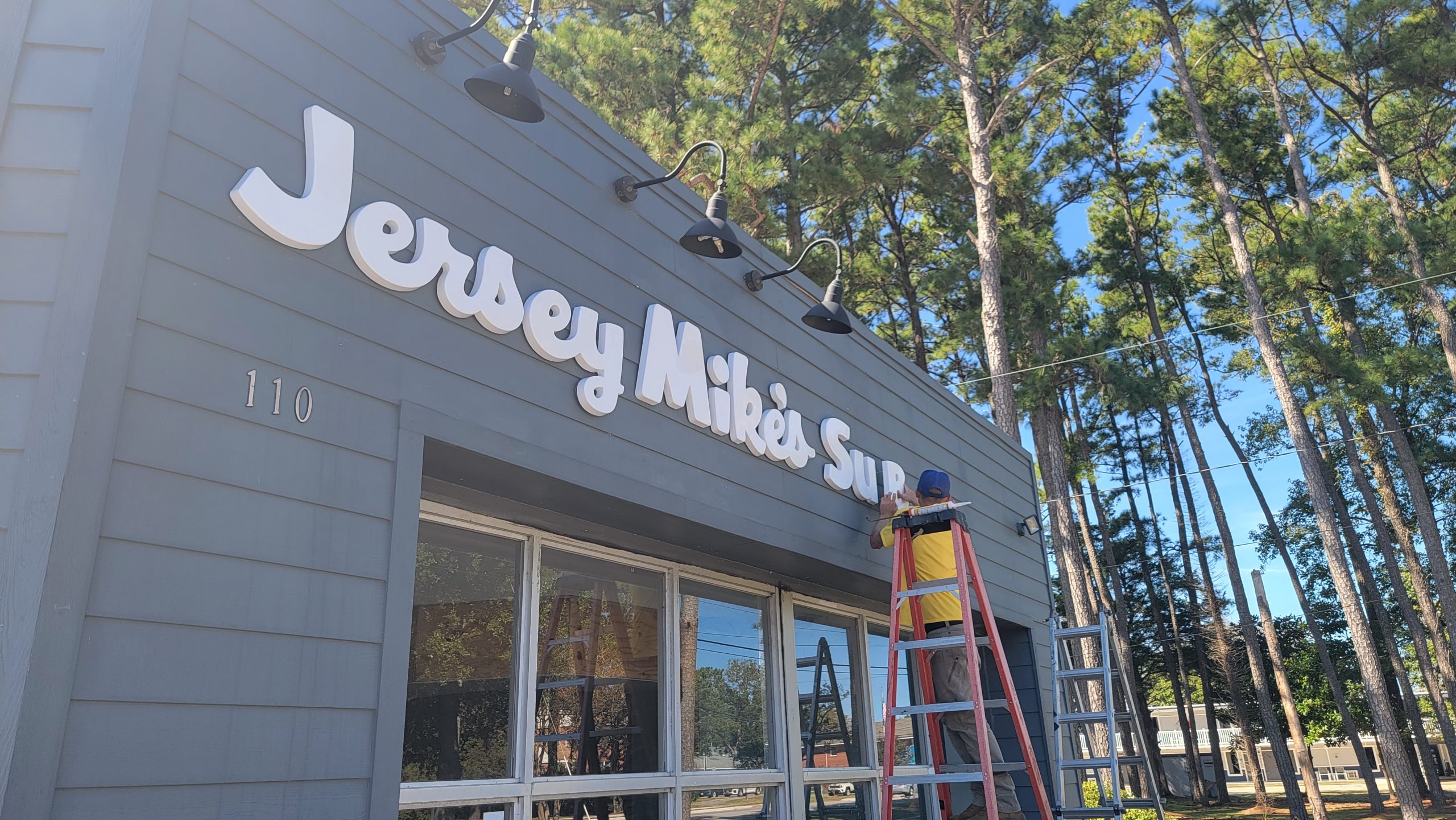 A much-anticipated Jersey Mike’s opens on Tuesday on Roanoke Island, and will be holding a grand opening celebration the rest of the week that benefits Manteo High School.

Outer Banks native sons Lynwood Evans and Shaun Hayman brought the first Jersey Mike’s franchise to Elizabeth City in October 2013, and have since opened locations in Moyock, Southern Shores and Nags Head. Now they are getting set to open the doors in Manteo.

“We’ve been looking, honestly, at Manteo for a long time,” Hayman said in an interview in October. “When we first opened Nags Head, we targeted and signed a five store deal with Jersey Mike’s for the franchise development agreement.”

The Manteo store is located at 110 South US-64, adjacent to the Piggly Wiggly in a spot previously occupied by several businesses, most recently Verizon and previously Doug Saul’s BBQ.

“With the new COA campus, of course, you’ve got the county seat just down the street as far as the courthouse and all the government buildings, we feel like it should be a pretty good location overall,” Hayman said.

Hayman and Evans grew up in the Outer Banks restaurant business at a pair of icons from the latter-half of the 20th century. Hayman’s family owned The Seafare in Nags Head, and Evans’ parents had the family namesake Evans Crab House in Kill Devil Hills.

Each of their franchises carry the corporate name “Soundside Subs” honoring their local heritage. And being natives, they understand the apprehension so many have with the expansion of national chains into the Outer Banks.

“When we came to Nags Head, there was the typical pushback (of a national chain), and it took some folks a little while to come in and try us,” Hayman said.

But since opening the first store in 2013, Hayman and Evans have turned their stores popularity with locals and visitors alike into a windfall for the region’s non-profits, schools and civic organizations.

“Giving back to the local community is part of the chain’s history and mission,” Hayman said.

Their charitable efforts range from free sub coupons for groups to giveaway or raffle off to direct donations from sales on grand openings and throughout the month of March every year.

Since getting started nine years ago, the locally-owned Jersey Mike’s stores have given back nearly $225,000 to organizations across northeastern North Carolina on the Outer Banks.

“When we open, it’s a pretty big deal and we give to a designated charity or group for the first five days,” Hayman said.

The grand opening fundraiser at the Manteo store from Tuesday, December 13 through Saturday, December 17 to support Manteo High School. Store hours are 10 a.m. to 9 p.m., seven days a week.

Customers who receive a special fundraising coupon distributed through a grassroots effort prior to the opening can make a minimum $2 contribution in store to Manteo High School in exchange for a regular sub. Customers must have a coupon to be eligible.

Guests can place orders in-store or for pickup through the website or through the Jersey Mike’s app.

Founded in 1975 in Point Pleasant, New Jersey, Jersey Mike’s has rapidly expanded nationwide over the last decade, growing from around 750 locations to more than 2,000.

They serve submarine sandwiches made to order, slicing the meats and cheeses as needed. A popular way to top off the sandwich with condiments is to order it “Mike’s Way”, which includes sliced onions, shredded lettuce, tomatoes, oregano, salt (spices) and “The Juice” — a mixture of red wine vinegar and olive oil. And they also have a signature cherry pepper relish.

Hayman said getting the Manteo location open took a little longer than they planned.

Along with the supply chain issues that have slowed construction projects around the world and getting necessary equipment, there’s been the challenge of converting a space built around 50 years ago.

“There’s some unique characters to it…like our hood that’s going to come out the side of the building as opposed to through the roof because of the way the building was designed,” Hayman said in October.

Hayman said the Town of Manteo has been great to work with in getting the shop ready and figuring out how to work with the space while staying within building codes.

“We’re having to kind of be a little creative with what we’re trying to achieve. And we feel like we’ve accomplished that,” Hayman said.

“We’re really looking forward to getting open in Manteo. It’s a small tightknit community. My mom grew up in Manteo, Lynwood and I went to school in Manteo,” Hayman said. “We are excited to get open, it’s taken longer than we expected. But what we hear, Manteo is ready and welcoming.”