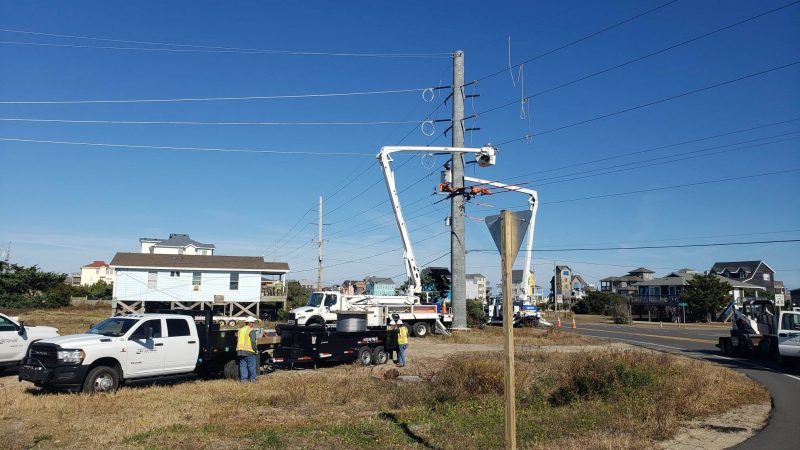 Power to Hatteras, Ocracoke will transfer to the new Jug Handle Bridge on Tuesday

The Cape Hatteras Electric Cooperative will complete the final steps to transfer power to the new transmission lines on the Jug Handle (or Bridge at Rodanthe on Tuesday, December 6.

On November 29, CHEC crews spliced and connected the cables on the south side of the bridge, and the work on December 6 will entail an identical cable-splicing operation at the north end, followed by officially transferring the power from the old overhead lines to the bridge structure.

During the construction of the new bridge, CHEC was hard at work to build a new conduit system located under the 2.4-mile-long structure. The power delivered to Hatteras and Ocracoke Islands is solely provided by the transmission lines that run parallel to N.C. Highway 12, and before the Jug Handle Bridge opened in July, that route included the Mirlo Beach stretch between Rodanthe and Pea Island that the new bridge now bypasses.

Because of this roadway shift, CHEC began work in December of 2021 to move the overhead transmission lines to a secure locale under the new bridge, with help from contractor New River Electrical, (and its subcontractor Aptus), to install the hanger, conduit system, and cables.

Originally, the new under-bridge conduit system was expected to be complete and operational by February of 2023, but the work to move the power is finishing months ahead of schedule.

Once the switch is complete, Hatteras and Ocracoke Islands will have more reliable power for the indefinite future, as the overhead lines in the Mirlo Beach area were always located in a troublesome spot. When the S-Curves portion of N.C. Highway 12 flooded with ocean overwash during storms, all structures in the immediate area were impacted, which included the power lines.

“This is definitely a significant investment in the reliability of service for Hatteras and Ocracoke Islands,” said Laura Ertle, ‎Director of Public Relations and Marketing for CHEC in an earlier interview. “This move takes away all risk of ocean overwash, salt contamination, and all of the problems that can happen in that vulnerable section of Hatteras Island.”

Meanwhile, the North Carolina Department of Transportation (NCDOT) is continuing its work to remove the old roadway in the S-Curves section, and Tim Hass, NCDOT spokesperson, stated that the project is roughly 85% complete, per a recent update.

Hatteras and Ocracoke Islands will be served by limited diesel generators during CHEC’s work on Tuesday. For more information and updates, see the CHEC’s Facebook page at https://www.facebook.com/CapeHatterasElectricCoop/.