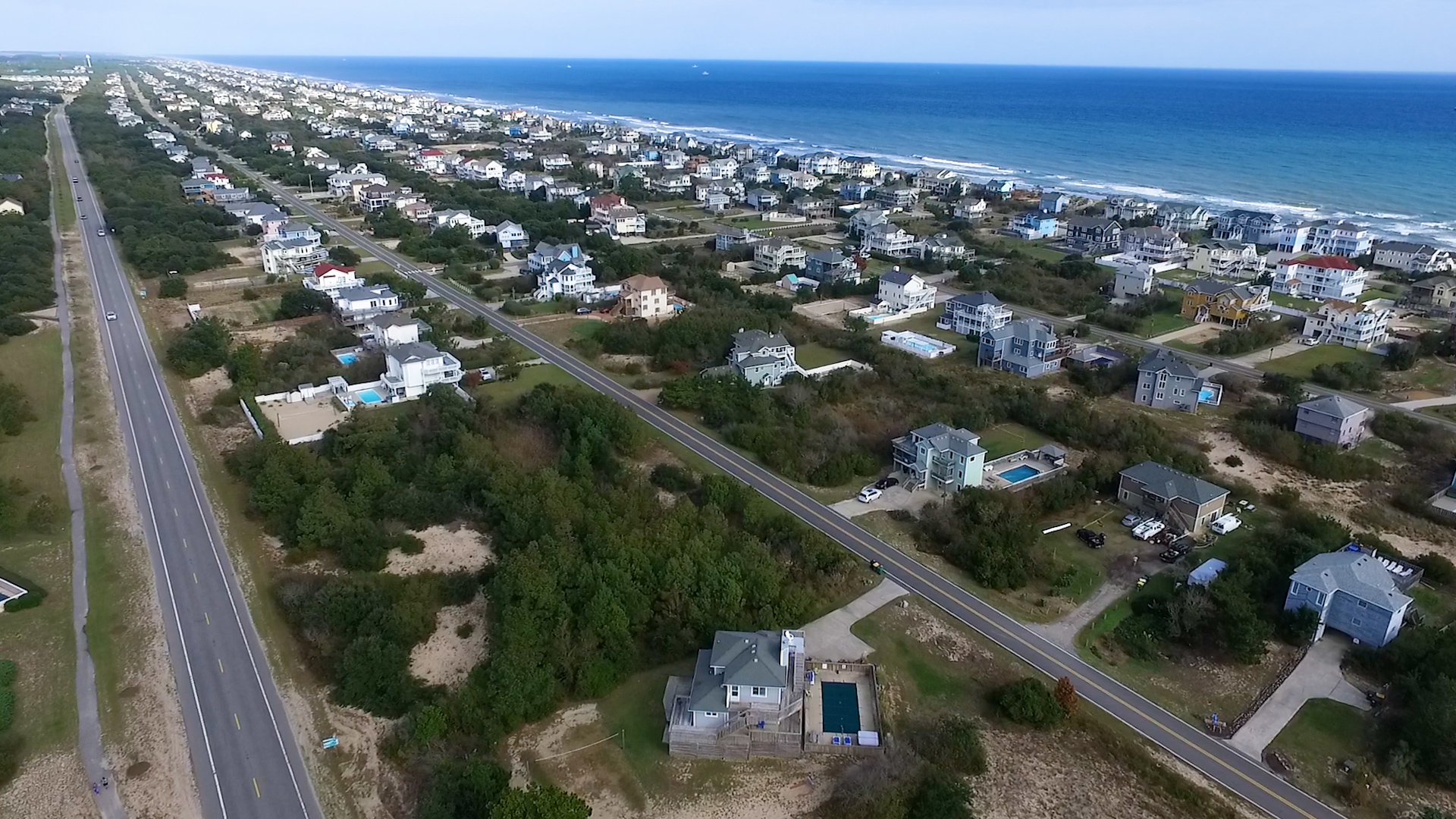 Despite higher ratings that can be a “double-edged sword” when seeking assistance for further economic development and access to grants for capital projects such as building new schools, a pair of local counties show positive economic growth headed into the new year.

“When you are the fastest growing in the state, when you have one of the lowest adjusted tax rates in the state and are financially sound, it brings opportunities,” said Currituck County Board of Commissioners Chairman Mike Payment.

Pasquotank County moved up in the state’s annual economic development tiers from Tier One to Tier Two, thanks to an improvement in median household income and the county’s property tax base.

“The improved Tier status shows that Pasquotank County is making good economic progress. The growth that has taken place throughout our county has had a positive impact,” said Pasquotank County Manager Sparty Hammett.

Since 2007, North Carolina has used a three-level system for designating county development tiers as mandated by state law which is used to determine a variety of funding opportunities to assist in economic development.

According the report, Currituck County has the state’s fourth highest adjusted property tax base per capita for fiscal year 2022-23 at $260,909. Much of that is driven by high property values along the Currituck Outer Banks.

Between July 2018 and July 2021, Currituck had the state’s biggest increase in population of 11.2 percent, and sixth highest median household income of $73,433.

Average unemployment in Currituck between October 2021 and September 2022 was 3.22 percent, 20th lowest in the state.

“I think it shows we are doing a lot of good things, and why businesses like being here. If other businesses outside the county see we are thriving, that can help bring in bigger opportunities,” Payment said.

“But at the same time, we are still considered a rural county,” Payment added. “When we apply for grants that are for rural counties for projects like new schools, we get turned down every time.”

“This shift was largely driven by a change in the county’s median household income rate rank, which moved from #56 last year to #73 this year,” the report stated.

“Businesses such as TCOM and Telephonics are expanding; the Coast Guard continues to be a strong economic anchor; Elizabeth City State University student enrollment is increasing, the Aviation Program is expanding, and major capital projects are in progress; and we have a growing and thriving Downtown central business district,” Hammett said.

Despite Dare County having the highest per capita property tax base in North Carolina ($438,337), and seventh-highest median household income ($72,962), its relatively-high average unemployment rate over the 12 month period (4.42%, 75th highest in N.C.) keeps Dare in Tier 2 by just one spot after its overall rank came in at 21st.

Five of the sixth biggest declines in individual county population were found in northeastern North Carolina, with Hyde, Tyrrell, Bertie, Hertford and Gates counties all seeing residents leave between 2018 and 2021.

Hyde County ranks just ahead of Currituck in property tax base per capita, at $266,249, with a majority of that base located on Ocracoke Island.

The three Outer Banks counties are the top four in North Carolina for property tax base per capita. Avery County, home of the resort mountain town of Banner Elk and the Sugar Mountain ski area, has the second highest property tax base.

Currituck and Camden are the only Tier Three counties in northeastern North Carolina for 2023. While Camden ranks in the top 10 in population growth and median income, its property tax base is only 46th highest.

Nine other counties in North Carolina will change tiers in 2023, with Avery, Caldwell, Cleveland and Swain moving to a less distressed tier. Counties moving to a more distressed tier include Onslow, Pitt, Randolph, Surry, and Transylvania. 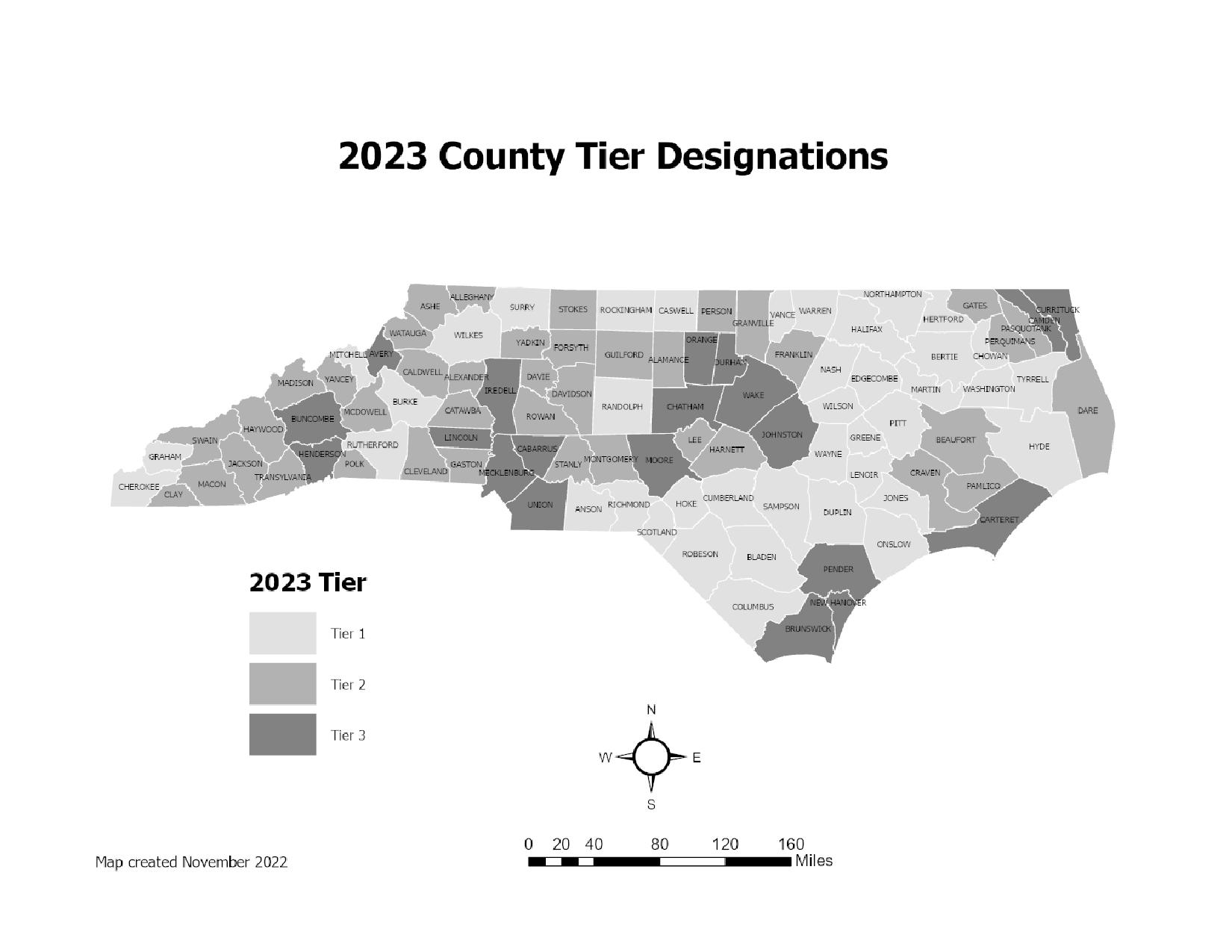 How Tier Rankings Are Calculated
The Development Tier Designation statute (§143B-437.08) provides specific guidelines for calculating annual tier rankings. This process assigns each county to a designation of Tier One (most distressed), Tier Two, or Tier Three (least distressed).

Assuming no ties in rankings, the statute requires 40 Tier One, 40 Tier Two, and 20 Tier Three counties each year. In the event of a tie for the final position as a Tier One or Tier Two county, both counties will be placed in the lower tier.

Each county is ranked from 1 to 100 on each variable, making the highest possible County Rank Sum 400, and the lowest 4.

After calculating the County Rank Sum, counties are then ranked from most distressed (1) to least distressed (100) in order to determine their Economic Distress Rank.

Note that the 2018 Appropriations Act (S.L. 2018-5, Section 15.2.(a)) eliminated several “adjustment factors” that will no longer be used to calculate the final tier ranks, adjustments that previously factored small population sizes and poverty rates into the calculations.

In addition, §143B-437.07.(d) calls for the Department of Commerce to publish the state performance statistic for each of the four factors, alongside the county values.

Any county underperforming the state average on any of the four factors may request assistance from the Department to improve their performance on the given factor.