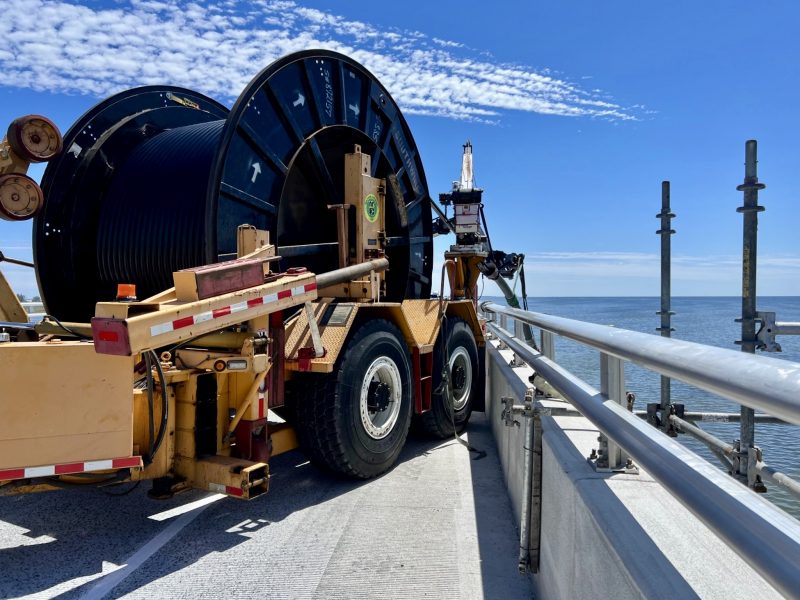 Jug Handle Bridge power lines to be connected Tuesday, Hatteras and Ocracoke on generator during work

The Cape Hatteras Electric Cooperative is ready to transfer power to the new-in-2022 Jug Handle Bridge at Rodanthe, with the transition expected to be fully complete by next week.

During the construction of the new bridge, CHEC was also hard at work to build a new conduit system located under the 2.4-mile-long structure. The power delivered to Hatteras and Ocracoke Islands is solely provided by the transmission lines that run parallel to N.C. Highway 12, and before the Jug Handle Bridge opened in July, that route included the Mirlo Beach stretch between Rodanthe and Pea Island that the new bridge now bypasses.

Because of this roadway shift, CHEC began work in December of 2021 to move the overhead transmission lines to a secure locale under the new bridge, with help from contractor New River Electrical, (and its subcontractor Aptus), to install the hanger, conduit system, and cables.

All work on the bridge structure itself is done, and CHEC has also completed the testing process to ensure that all four cables under the bridge will be working properly once the switch is made.

“We have been waiting to make the call to go ahead and make the cutover, which is dependent on weather and load,” said Laura Ertle, ‎Director of Public Relations and Marketing for CHEC. “We wanted to wait until after Thanksgiving, and now that things have quieted down, it’s the perfect time to get this done.”

On Tuesday, November 29, CHEC crews will splice and connect the cables on the south side of the bridge, and will also turn on the bridge cables to allow them to “soak.” “That basically means that we have to let [the cables] sit and energize for a while, like how you would warm up a car,” said Ertle.

A brief power outage will occur at 7:00 a.m. on Tuesday, and while this work is being completed, Hatteras and Ocracoke Islands will run on generator power, which is why CHEC waited until now to finalize the switch.

“One of the reasons we waited is because the load has to be low to ensure that the diesel generators can handle power to [the islands], and Thanksgiving week is a busy time of year,” said Ertle.

A second and similar power outage will also occur sometime next week, when CHEC crews will conduct an identical cable-splicing operation at the north end of the bridge, and officially transfer the power from the old overhead lines to the bridge structure.

Originally, the new under-bridge conduit system was expected to be complete and operational by February of 2023, but the work to move the power is finishing months ahead of schedule.

“One of the things that changed from when we first started this project is that NCDOT had asked us to suspend work in the summer months, so as not to interfere with summer traffic,” said Ertle. “Originally, we planned to work as much as possible until Memorial Day, and then return to work again on Labor Day.”

The problem with this original plan was that once the bridge was complete and open, and work to remove the old highway began, accessing the overhead lines in the bypassed stretch of the S-Curves would become increasingly difficult.

“We expressed some concern about road removal and accessing those [overhead] lines in the event of a hurricane or storm, so they graciously reworked the plan, and two things happened,” said Ertle. “The U.S. Fish and Wildlife Service agreed to delay the road removal for several months, and the NCDOT agreed to allow us to work in the summer months. That expedited the project a lot.”

Once the switch is complete, Hatteras and Ocracoke Islands will have more reliable power for the indefinite future, as the overhead lines in the Mirlo Beach area were always located in a troublesome spot. When the S-Curves portion of N.C. Highway 12 flooded with ocean overwash during storms, all structures in the immediate area were impacted, which included the power lines.

“This is definitely a significant investment in the reliability of service for Hatteras and Ocracoke Islands,” said Ertle. “This move takes away all risk of ocean overwash, salt contamination, and all of the problems that can happen in that vulnerable section of Hatteras Island.”

“We’ve been working on this for a long time, so it’s really good to see it come to a successful ending.”