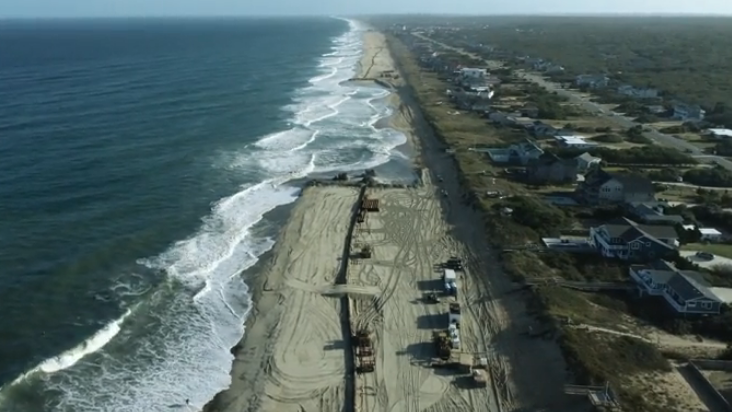 With an earlier-than-planned departure just before Thanksgiving, beach nourishment along the Outer Banks appears to be finished for 2022.

And while Duck will not get its northern beach widened until next spring at the earliest, Southern Shores leaders appear to be concerned they didn’t get all of the sand they were promised before Weeks Marine sent their dredges elsewhere.

“Based on a visual inspection it is difficult to determine if the project design goal has been achieved,” according to an email update from the Town of Southern Shores sent Friday.

According to the Town of Southern Shores’ website, sand pumping was completed on November 22 along approximately 3.8 miles of shoreline at a cost of $11,457,602.

Along with placing sand on the beach and into the surf zone, grading the sand up to the dune line is also part of the work that was scheduled to take around two months to complete.

The project is funded by a combination of property taxes and the town’s portion of the Dare County occupancy tax on vacation rentals that is set aside for beach nourishment.

A bi-weekly public meeting on the project is still scheduled for Wednesday, November 30, at 1:30 p.m. at the Pitts Center, and will also be available via Zoom at https://us02web.zoom.us/j/86210244731?pwd=MWFYVWlQRHpYN0FneXBTUzZrZjlRQT09.

The Town of Duck announced last week their beach nourishment project from the Army Corps of Engineers Research Pier to near Skimmer Way will be delayed until at least the middle of next March.

Weeks Marine said the delay of the Duck project is because they got behind in recent weeks due to equipment issues and weather-related delays, and their commitment to a time-sensitive job elsewhere.

“This will include assurances that any beach/dune losses between now and when the project is completed are properly replaced, and that Weeks Marine will be responsible for all costs associated with additional sand and delays,” according to a statement from Town of Duck.

This is not the first time Weeks Marine has run into issues completing a beach nourishment project along the Outer Banks.

The same company ran into numerous mechanical and weather delays while widening the beaches from The Haulover to the old Coast Guard base in Buxton between 2017 and 2018.

Over the summer and early fall, Weeks Marine widened the beaches of Kill Devil Hills and Kitty Hawk. The projects along South Nags Head, Avon and Buxton were completed this summer by Great Lakes Dock and Dredge.

Southern Shores staff members have talked to the project’s engineering firm, Coastal Planning and Engineering, who is expected early in the coming week to present results of their surveys of the nearshore area to determine if all the sand promised by Weeks Marine was pumped.

“Once we receive this information we will be in a much better position to share with you all the status of our project,” according to the Southern Shores email.