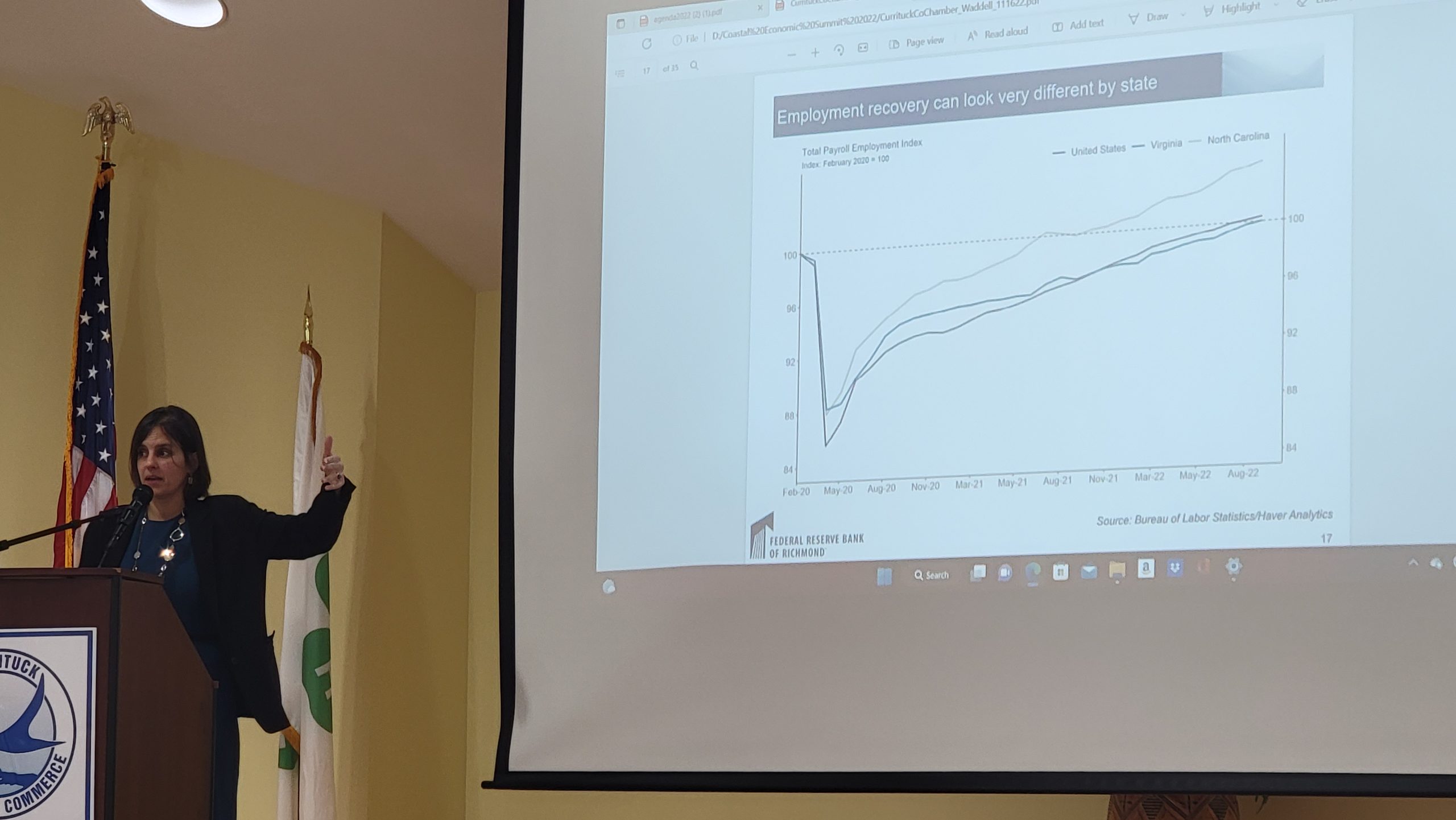 A Federal Reserve economist says job growth in North Carolina in the wake of the COVID-19 pandemic continues to outpace Virginia and the rest of the United States, but that much of the increase is taking place in the state’s metropolitan areas and several key demographics are not returning to the workforce.

Sonya Ravindranath Waddell, Vice President and Economist in Regional and Community Analysis for the Federal Reserve Bank of Richmond, was part of a panel of speakers at last week’s Currituck Chamber of Commerce 2022 Coastal Economic Summit, presented by Chesapeake Regional Healthcare, sponsored by Twiddy & Company Realtors and Towne Insurance Agency.

The summit gave an opportunity for attendees to gain insights on the future of the northern Outer Banks economy to inform and provide outreach opportunities surrounding current issues affecting the North Carolina coast’s Outer Banks visitor economy industries and communities, such as housing, workforce issues and service areas.

During her presentation, Waddell reviewed a number of key economic factors over the last two years that have led to the rise in inflation and the threat of a possible recession.

She then also presented data that compared the two states, not only because northeastern North Carolina has a significant portion of its economy tied to its neighbor to the north, but also the U.S. Census Bureau includes Currituck County as a part of the Virginia Beach-Norfolk-Newport News metropolitan area.

Two of every three residents of Currituck County commute out-of-county or out-of-state to work, Waddell noted.

Waddell said that while Virginia has moved just above pre-pandemic employment levels through September, North Carolina has jumped 4.5 percent ahead of where job figures stood in February 2020 and passed that mark in the middle of 2021.

“This is not just a (post)-COVID phenomenon, we have seen employment in North Carolina grow faster than Virginia since 2011” Waddell said.

“A lot of that is in the service sector” Waddell said. “Of the 200,000 jobs North Carolina has added since February 2020, about 43 percent were in professional business services, with another 16 percent in transportation and warehousing.”

While most sectors have returned or are ahead of their pre-pandemic levels, two of the biggest employer segments on the Outer Banks and in northeastern North Carolina have not.

North Carolina’s leisure and hospitality industry has returned to its February 2020 levels this past September, 6.7 percent better than the entire country. The state and local government sector in N.C. is still 2.4 percent behind, matching the U.S. average.

On Friday, the N.C. Budget and Tax Center placed the blame on salaries not keeping up with inflation for government jobs lagging behind.

Much of the growth in North Carolina’s employment continues to take place in the areas west of I-95, concentrated around Raleigh and Charlotte.

Waddell said another sector that North Carolina has seen growth that outpaced the rest of the country after the start of the pandemic was in the healthcare and social assistance sectors.

She said why North Carolina has outpaced Virginia in job growth can’t be fully explained, but there are several possible indicators.

One factor Waddell noted was more anecdotal is the number of people she knew who relocated to North Carolina without have a new job secured, especially in the Triangle and the Queen City, compared to places like Richmond and northern Virginia.

Data collected by the Federal Reserve shows retirements in the 65-plus population have been mostly responsible of the roughly one percent drop in labor force participation nationwide, according to Waddell.

She added that retirements of men 55-plus in Virginia actually was responsible for a larger percentage of workforce declines there.

“Overall labor force participation in North Carolina is a little less than one percent down from pre-COVID,” Waddell said, adding that
Virginia saw a much steeper decline at the start of the pandemic and has been much slower to recover overall.

Waddell also noted that the labor market is still tight in the wake of the pandemic, with current figures showing between 1.6 and 1.8 job openings compared to each hire.

Following her presentation, Waddell answered a question from a local business owner in the audience about if she sees anything to indicate the labor force will improve.

“We can do something about labor force participation…that’s been falling among 16 to 24 year old men,” Waddell said.

She added that their lack of participation in the labor force cannot simply be explained by “being in school”.

Waddell said that some of it could be related to “deaths of despair” that was the subject of a study by Princeton University economists in 2015 that working-age white men and women without four-year college degrees were dying of suicide, drug overdoses, and alcohol-related liver disease at unprecedented rates.

Waddell also noted participation by women overall in the U.S. is still lower than where it was in the 1990s, although she said that could be “more explained by choice” including lack of childcare and other factors.

She added that workforce development at an earlier age is still lacking in the United States compared to other countries and other programs.

“I don’t see the trajectory for an increased labor force participation rate without (changing) some things we do as a nation that is not monetary policy,” Waddell said.