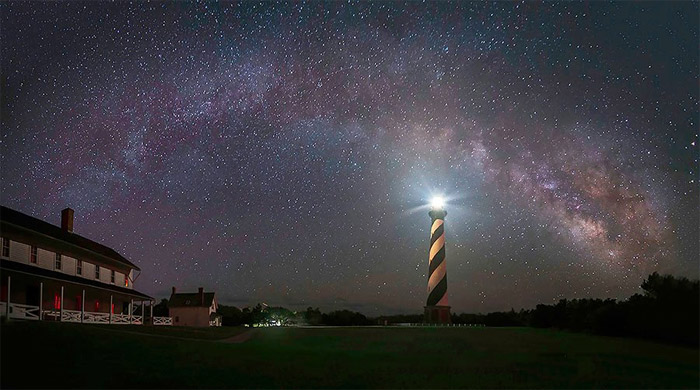 North Carolina will distribute more than $6.8 million to fund the installation or expansion of electric vehicle charging stations at 64 sites across the state, including one at the Cape Hatteras Lighthouse.

Selected projects will enhance and extend the current zero-emission vehicle infrastructure network from the mountains to the coast, reducing range anxiety and supporting efforts to decrease emissions of greenhouse gases and other air pollutants from the transportation sector.

The N.C. Department of Environmental Quality’s (DEQ) Division of Air Quality (DAQ) is awarding the grants and rebates under Phase 2 of the N.C. Volkswagen Settlement Program, which uses funds from the national settlement with the automaker.

Among the awards is nearly $5.9 million in grants to fund the installation of 104 new DC Fast charging ports at 40 sites along priority corridors and major coastal evacuation routes.

Priority corridors include segments along interstates 40, 77, 85 and 95, U.S. 64 and U.S. 17, as well as other highways across the state without existing charging infrastructure. These projects will fill gaps in the charging network along these corridors. DC Fast chargers offer rapid charging and are suitable along major highways because they allow drivers to quickly continue to their destination.

In this program, 75% of the awarded funds will go to projects in rural counties, and nearly half will go to historically under-resourced counties that DEQ targeted for additional outreach and support during the Phase 2 application process. Thirty-three of the 40 charging sites will have 100% of their power covered with renewable energy credits.

In selecting awards for this program, DAQ coordinated with the N.C. Department of Transportation to maximize funding for charging infrastructure that meets the requirements in the National Electric Vehicle Infrastructure (NEVI) Program. NC Volkswagen Settlement funding was awarded to install 30 DC Fast charging ports in the state that will already be NEVI compliant, aligning with NCDOT’s goal of using $109 million in federal funding to build out electric vehicle infrastructure along approved corridors.

DAQ also is awarding $764,000 in grants to public and private organizations to make upgrades at 13 existing DC Fast sites. These projects will add five new ports and replace 11 others that are obsolete or non-functioning. DAQ is awarding 43% of these funds to projects in rural counties. Six of the charging sites will have 100% of their power covered with renewable energy credits.

In addition, $196,000 in new rebates will fund the installation of Level 2 chargers at workplaces, apartment complexes, parks, urban centers and other public locations. Level 2 chargers are ideal at destinations where electric vehicles can be parked for an hour or longer. This funding will go to installing 62 new charging ports at 11 sites across the state.

These new rebates bring the total awarded by DAQ for Level 2 chargers to more than $1.1 million in Phase 2 of the N.C. Volkswagen Settlement Program. More than $869,000 is still available to local government agencies, nonprofits and private businesses on a first-come, first-served basis. Rebates up to a maximum of $5,000 are available to government applicants and up to $4,000 to non-government applicants for each new charging port installed.

Cape Hatteras Electric Cooperative has been awarded $10,000 for a Level 2 Charger that will be located in the parking area of the Cape Hatteras Light Station at 46375 Lighthouse Road in Buxton.

These awards aim to increase the use of clean zero-emission vehicles in place of gas-powered cars and improve air quality by significantly reducing emissions of nitrogen oxides, particulate matter and greenhouse gases. DAQ estimates that the DC Fast and Level 2 chargers announced today will together prevent more than 26,500 pounds of nitrogen oxides from being emitted into the atmosphere each year.

Phase 2 of the N.C. Volkswagen Settlement Program covers the remaining $68 million of the state’s share of a national settlement with the automaker. DEQ is allocating the full 15% allowed in the Volkswagen State Trust Agreement for zero-emission vehicle charging infrastructure projects under Phase 2.