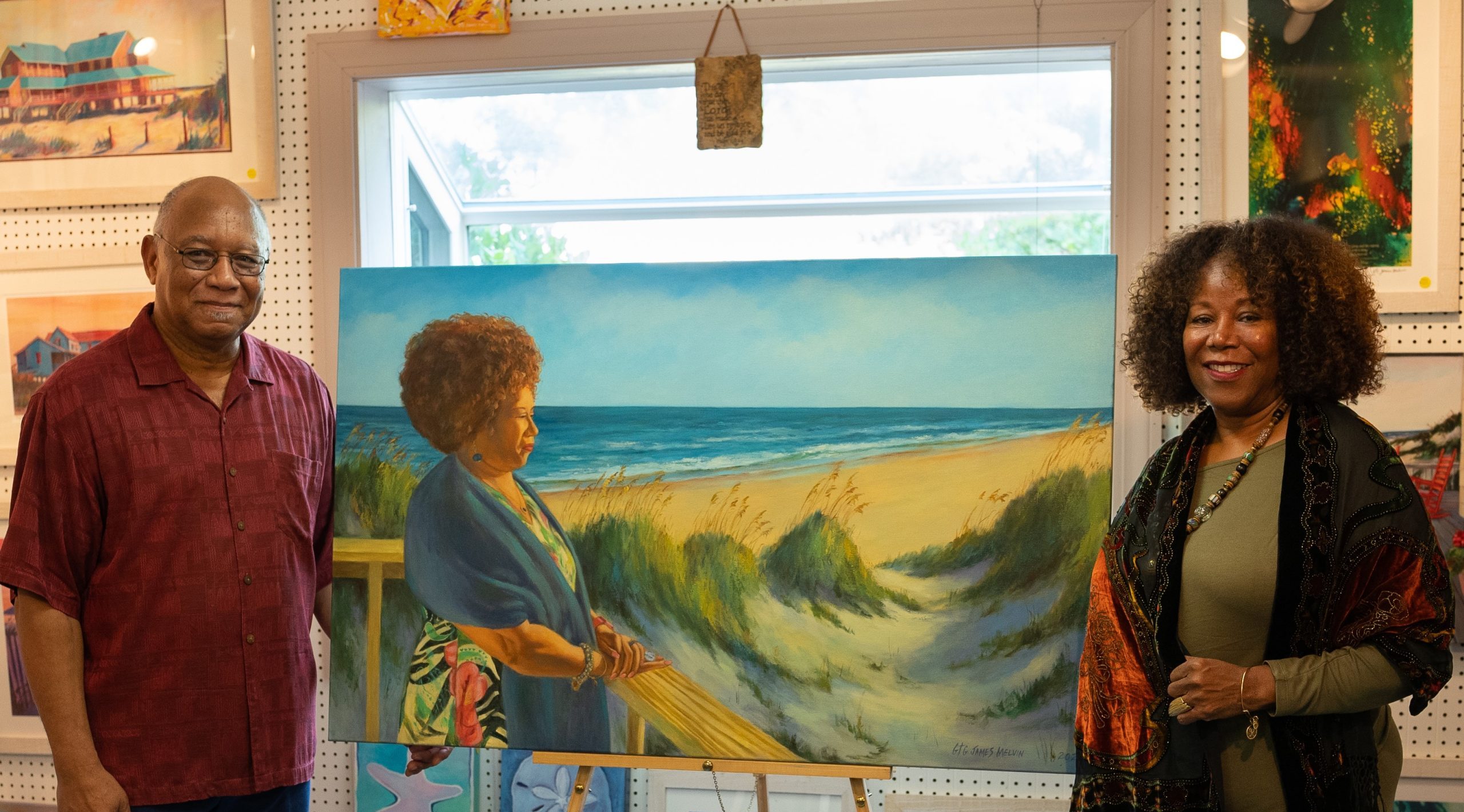 At a small gathering in the Nags Head gallery of artist James Melvin on Tuesday, a portrait was unveiled of civil rights icon Ruby Bridges overlooking the beach she plans to one day call her second home.

Greeted by an angry mob and escorted by federal marshals, Bridges bravely crossed the threshold of an all-white school in 1960 at the age of six and into history as she single-handedly initiated the desegregation of New Orleans’ public schools.

That moment was captured in 1964 by legendary Americana artist Norman Rockwell in his painting “The Problem We All Live With”, which became an iconic image of the civil rights movement.

During her first visit to the Outer Banks last year, and while taking in the view from the home where she was staying, WOBX Editor-In-Chief Miles Daniels took a picture of Bridges that inspired the painting by Melvin.

Inspired to become a professional artist at the age of 10, Melvin’s versatility in a variety of mediums depicts coastal scenes of beach cottages and dunes, and everything from ocean sunrise to the sunset on the sound.

Prior to the unveiling, Melvin read a selection from “Johnny Longlegs – A Tale of Big Birds”, one of the dozens of Outer Banks-themed children’s nature and history books that he has illustrated for his longtime collaborator and writer Suzanne Tate.

A subject of numerous children’s books herself, Bridges recently released her own kids-focused title, “I Am Ruby Bridges: How One Six-Year-Old Girl’s March to School Changed the World”.

Ruby then shared her story, along with anecdotes on how the struggle for civil rights continues today, and shared her new-found love of the Outer Banks.

Melvin and Bridges then unveiled the portrait, which she has requested remain on the Outer Banks.

Plans are currently underway for the portrait to be displayed in the Capt. Richard Etheridge Lobby inside the new academic building at College of Albemarle-Dare in Manteo.

This Is Your Time and I Am Ruby Bridges are available for purchase from booksellers everywhere, including local OBX favorite Duck’s Cottage. For those with an Apple Watch, Time to Walk with Ruby Bridges is available on Apple Fitness+. The 1998 Disney movie Ruby Bridges is currently streaming on Disney+.

During her first visit to the Outer Banks in 2021, Ruby sat down for an extended conversation with Twiddy & Co. President Clark Twiddy, which you can read about here. She even cooked up a pot of gumbo.