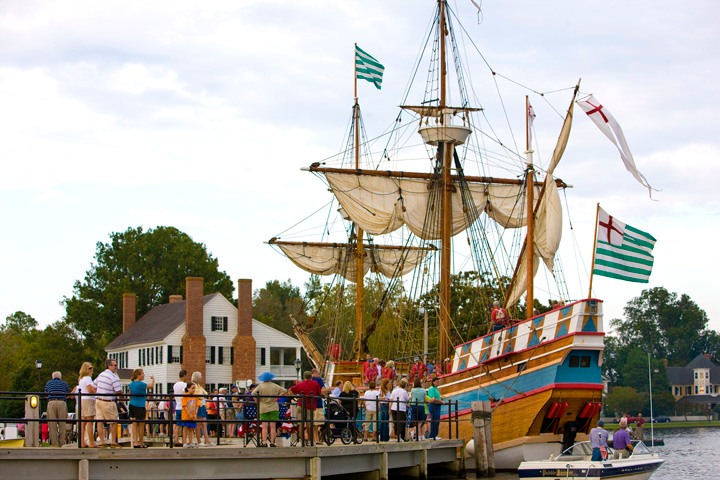 After being stranded at its dock for several years by shoaling in Shallowbag Bay and Roanoke Sound, the Elizabeth II is headed across the Albemarle Sound for a stay in Historic Edenton through the weekend.

When it was built as part of the celebration of the 400th anniversary of the Roanoke Voyages from England to the New World, the Elizabeth II was also intended to be a floating, portable history classroom.

The replica 16th century sailing vessel was built by hand at what is now the Roanoke Island Maritime Museum and dedicated during a 1984 ceremony by Anne, Princess Royal.

However, the ship’s name does not honor her mother who passed away in September. It is named for the first Queen Elizabeth, who authorized Sir Walter Raleigh to send colonists to the New World between 1584 and 1587.

The Elizabeth II spends much of the year docked at Roanoke Island Festival Park, and has made numerous trips to a number of towns along North Carolina’s coastal waters in the last four decades.

She is hauled out of the water each winter at a local shipyard for annual maintenance of the wooden hull.

But from 2017 to 2021, the Elizabeth II remained at her homeport across Dough’s Creek from downtown Manteo because of sand filling the channels that run along Shallowbag Bay and Roanoke Sound.

A project in the fall and winter of 2020-21 deepened those channels enough to allow the Elizabeth II to motor (she is power by sail and diesel engines) to Wanchese for maintenance. And now she can resume one of her original intended purposes.

After departing Manteo Tuesday morning, she will be docked along the Edenton Bay waterfront near the end of South Broad Street, and will be open to the general public to tour for free on Saturday, Nov. 5 from 9 a.m. to 5 p.m. and Sunday, Nov. 6 from 9 a.m. to 4 p.m.