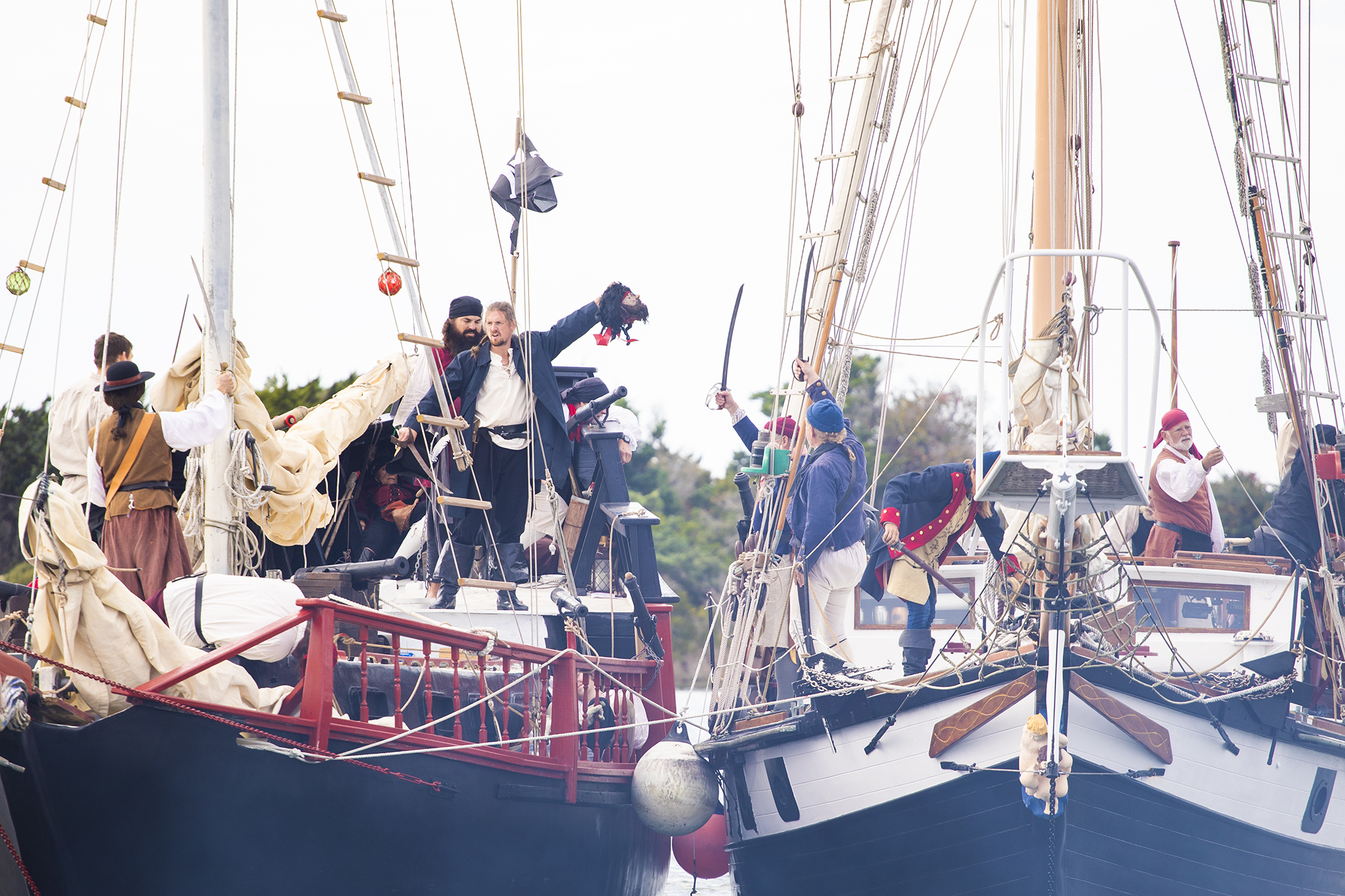 What really happened in Blackbeard’s final battle on Ocracoke? Find out during Blackbeard’s Pirate Jamboree Oct. 28-29

Are the history books correct about how Blackbeard met his demise off Ocracoke Island at the hand of British Royal Navy Lt. Robert Maynard in 1718?

North Carolina historian Kevin Duffus will present new history of this fateful event in his talk at 11:30 a.m. Saturday, Oct. 29, in the Berkley Barn during Blackbeard’s Pirate Jamboree.

“No chapter of American history is more horribly mangled and misleading as Blackbeard’s,” Duffus says, and that is what led him to “devote years to researching, analyzing and revising Blackbeard’s story because Blackbeard provides us with an excellent example of how over time the crystal-clear waters of the past become muddied with misinformation.”

You can learn what Duffus found during the two-day festival Oct. 28 and 29 on the Berkley Manor grounds.

Sponsored by the Ocracoke Civic & Business Association, events begin Friday evening in the Berkley Barn and will conclude at 6 p.m. on Saturday.

The weekend will kick off Friday at 7 p.m. with a showing of the 1952 movie “Blackbeard the Pirate” with Robert Newton, who has been called the “ultimate pirate actor… and is the learning base for future ‘pirates’ of the silver screen.”

Described as rollicking fun, the plot conflates some historical facts and is set in 1674 (Blackbeard was killed off Ocracoke in 1718).

There, a reformed pirate known as Sir Henry Morgan is governor in Jamaica and given the job of ridding the ocean of Blackbeard the pirate.

A young surgeon, Edward Maynard, believes Morgan is still a pirate and takes the assignment of becoming part of Blackbeard's crew to get his large reward and hopefully take care of these two men. Blackbeard manages to kidnap Morgan’s adopted daughter Edwina Mansfield, and now Maynard has his hands full if he wants to complete his mission.

Colonial minstrels the Motley Tones will be on hand with some songs at 6:30 and North Carolina historian Kevin Duffus will give a brief introduction to the movie.

Prior to that on Friday, Duffus will talk about the event on WOVV 90.1 FM at 11 a.m. with Peter Vankevich.

At noon, Duffus will hold a book signing for his book “The Last Days of Black Beard the Pirate,” at Books to be Red.

Various vendors also will be set up around the Berkley Barn from 2 to 5 p.m.

Saturday (Oct. 28) will feature a colonial village on the grounds of the Berkley Manor along with more than a dozen artisan vendors in Brigands Bazaar from 9 a.m. to 5 p.m.

All are welcome to join in the Pirate Parade at 10 a.m. from Ride the Wind to the encampment.

At 11:30 in the Berkley Barn, Duffus will present “Blackbeard’s Final Battle—What Really Happened.” Among the living history re-enactors are The Cannon Crew out of Beaufort. Led by Capt. Carl Cannon, the 17-member group will set up a colonial-era encampment with shipboard medicine, navigation, weaving and cooking.

Cannon’s period sloop, “The Adventure,” and Horatio Sinbad’s brigantine, “Meka II,” will circle in the harbor at 11 a.m., firing cannons.

They will be part of the three-ship “Battle of Ocracoke” at 2 p.m. along with the Beaufort Oars in their surf boat “Ranger.” Duffus will narrate the events via WOVV radio. To hear it, everyone can tune their phones or computers to www.Radio.Garden and drag the circle to Ocracoke or go to www.wovv.rocks and click “Listen live.”

Anyone is welcome to check out these boats at the NPS docks.

Also pitching their camps will be members of Leviathan Nautical Living History, a group dedicated to the accurate portrayal of a ship's company of the age of sail, spanning the years 1680 to 1865.

The Shadow Players will return this year and give a stage fighting demonstration and participate in the three-ship battle.
A giant walking Blackbeard, along with his sidekick Jimmy Bones, will participate in the parade and will circulate throughout the day. Colonial minstrels The Motley Tones will provide the musical soundtrack with period songs.

The event concludes with a memorial service at 5 p.m. in the Berkley Barn honoring the fallen of Blackebeard’s and Maynard’s crews.

Back on Nov. 22, 2007, Duffus was at Springer’s Point taking photos for his book “The Last Days of Black Beard” when he landed on having a memorial service for those killed in the Battle of Ocracoke on Nov. 22, 1718.

He recruited some pirate living history re-enactors to join him in 2008 for a service among themselves on Springer’s Point.

For several years, the event was just the memorial service until in 2011 when members of the community decided to create more of an event. 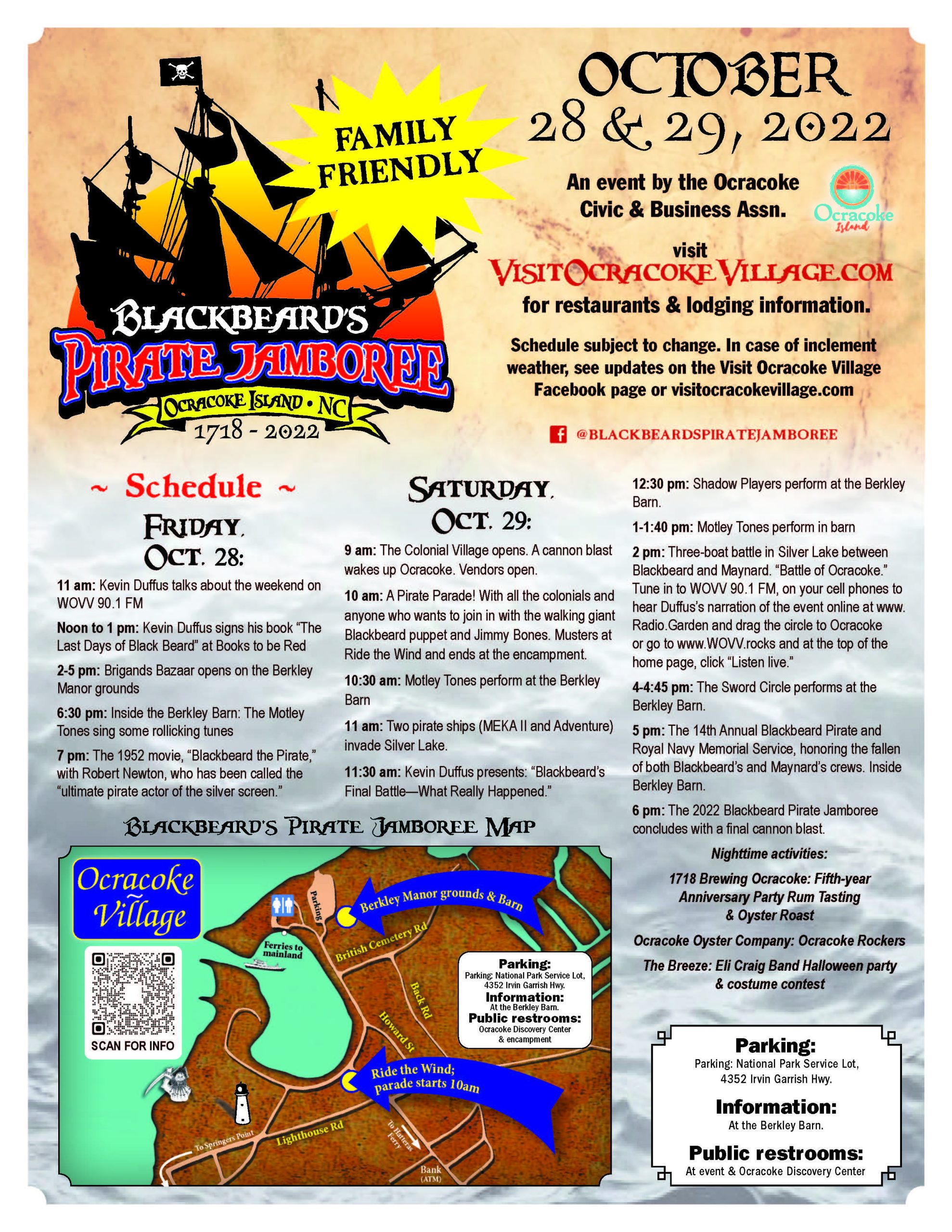