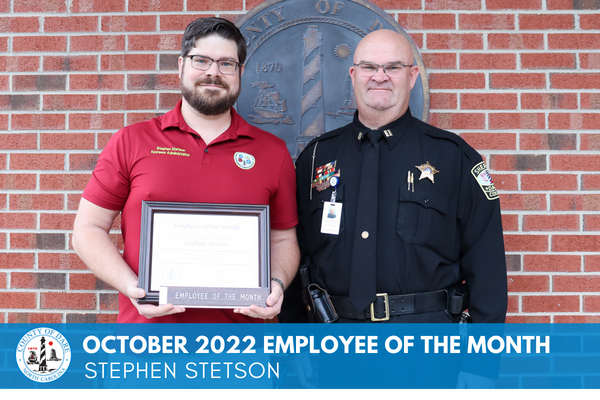 Stetson began working for Dare County in September 2017, when he officially took on his role as systems administrator for the 911 Communications Center, which operates out of the Dare County Emergency Operations Center in Manteo and provides services for Dare County, Tyrrell County and Hyde County.

“If the phone system goes down at the 911 Center, Stephen has to fix it,” said Scarborough. “If the CAD [computer-aided dispatch] system that serves all of Dare, Hyde and Tyrell counties’ public safety—law, fire and EMS—goes down, Stephen has to fix it. If anything happens at the 911 Center that affects anything with the service we provide, he’s the one-man show. He also is in charge of all of our computers in the Sheriff’s Office, the laptops in the cars and the desktops in the main office—he keeps all of them running.”

Of his many technology-related duties—which also include performing software installations and upgrades, as well as troubleshooting and repairing computer and network issues—perhaps the most important project Stetson has been tasked with recently is setting up Dare County’s brand-new CAD system.

“As everybody knows, the first of the year we embarked on a new CAD program that we purchased, and we started implementing it,” said Scarborough. “And I’ve talked to PSAP [public safety answering points] directors all over the state, and they’re having issues with their CAD system. I said, ‘Our stuff is going so smoothly. Why is it going so smoothly?’ Our project manager and all of our trainers said, ‘It’s because you have a brilliant mind with you. You have the most amazing person we have ever seen to ever work on CAD systems, public safety or anything—and that’s Stephen Stetson.’ He has made this project an absolute dream. Everything is going so smoothly. We moved up our go-live date by a month because of all the hard work he does.”

In addition to Scarborough, Stetson also received a considerable amount of praise from multiple colleagues who also submitted nomination forms recommending him for the prestigious honor of Dare County Employee of the Month—one of whom echoed Scarborough’s sentiments regarding Stetson’s efforts to implement the new CAD system.

“Our department is in the process of getting a new CAD system after 20 years, and Stephen is having to work with the company to build it from the ground up,” the nominator, who wished to remain anonymous, wrote in their nomination form. “This involves lots of multitasking, going through 20 years of data, working with all the agencies in public safety—all of the towns, fire departments, EMS, police and sheriff’s departments for three counties—and coordinating all of the transitions. This project is a monumental undertaking, and he still needs to take care of the current system and all the daily needs for [911 Communications, the Dare County Sheriff’s Office, Dare County Detention Center, Dare County EMS and the towns]. He is a superhero because without him working behind the scenes on the computers, radios, networks and phones, there would be no 911 or public safety because we wouldn’t have the information coming in, the records, the recordings or a way to get the calls and information to the other public safety agencies.”

In addition to highlighting his strong work ethic and willingness to go above and beyond the primary responsibilities of his position, Stetson’s colleagues also complimented his can-do attitude and cheerful demeanor.

“Stephen is very friendly and happy to be around while at work. During the last few months, he has been setting up a new CAD system for [911] Communications and has been on top of his game, never letting it get him down,” wrote Neries Sullivan, who serves as assistant communications director for the 911 Communications Center. “He has always been very helpful and polite to everyone in this office while stressing through the new stuff. He is even polite to others that may have to call him in during the late nights or on weekends to fix anything. He is a pleasure to work with every day. For only being here for five years, he has made a great impression on all of us at [911] Communications. He is very deserving of this award, especially at this time while setting up a new CAD.”

Another of Stetson’s colleagues submitted a nomination form that highlighted not only his helpfulness but also his willingness to perform a variety of tasks that are outside of his typical day-to-day duties in an effort to assist wherever he is needed.

“Stephen Stetson is a hard worker. He is available day or night if we have any IT issues. He never complains when help is needed and is quick to jump in and assist at a moment’s notice. He has even helped answer phones when we are really busy,” the nominator wrote. “Dare Central is in the process of obtaining a new CAD system, and Stephen has built the system to our specific needs from the ground up. He has worked long, hard hours and asked us thousands of questions to make sure the new system functions in the best possible way for us. He is an excellent IT specialist, and we are blessed to have someone that is knowledgeable and is always available, fast and friendly.”

As he concluded his remarks and presented Stetson with his Employee of the Month award, Scarborough commented, “He comes to work smiling just like this every day. He’s just an absolutely amazing person. He does so much. He does not want any recognition, and he has no idea how valuable he is to Dare County and public safety in Dare, Hyde and Tyrell counties—and there’s nothing I can do to say enough to tell him how much he means to our organization and all of public safety. He’s a great person and just amazingly brilliant.”