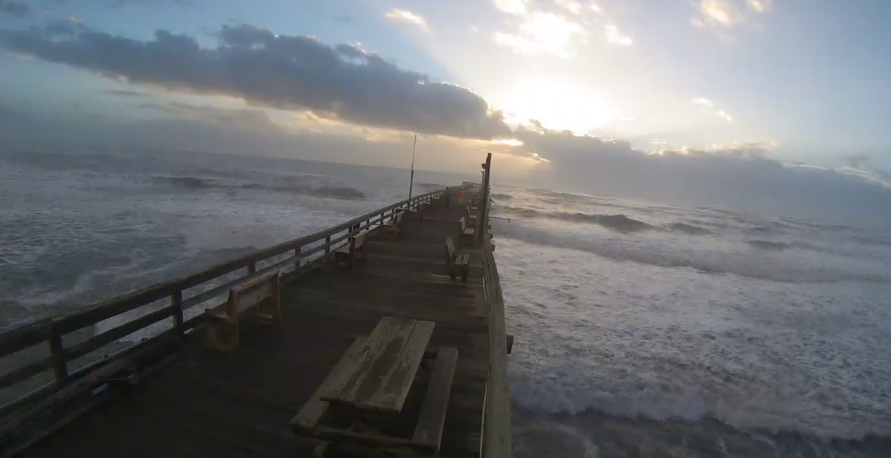 UPDATED, Saturday 7 a.m.
Other than a stray shower this morning, the rain and wind have departed the Outer Banks and northeastern North Carolina. For now.

All roads are open, but drivers should be mindful of areas with standing water throughout the region and sand that may have been blown onto N.C. 12 on Hatteras and Ocracoke. Ferry service is also resuming normal schedules today.

Cape Hatteras set a new record for daily rainfall total for September 30 with 5.92 inches recorded at Billy Mitchell Field in Frisco. That topped the old mark set in 1940 of 2.56 inches that was recorded at the historic U.S. Weather Bureau office in Hatteras village.

Overall, more than six inches of rain fell across much of eastern North Carolina from the combination of Hurricane Ian that made landfall on the South Carolina coast Friday and a frontal boundary stalled over the region. Final storm totals are still being collected by the National Weather Service.

Top wind gusts from the storm: 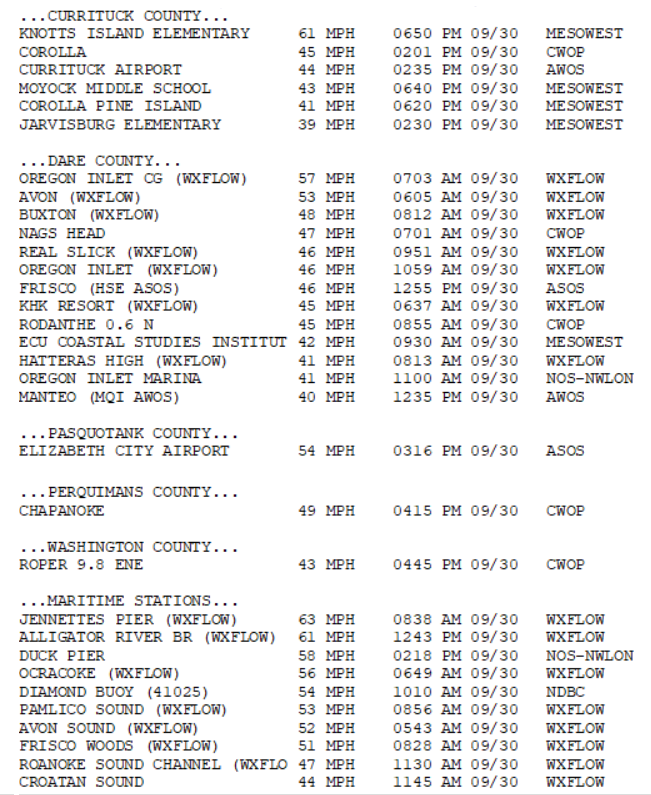 A possible waterspout tried to form over Hatteras village on Friday that caused minor damage to the ferry terminal building. Click here to see the video at The Island Free Press.

Hazardous surf conditions will continue with a high risk of rip currents and pounding shore break. 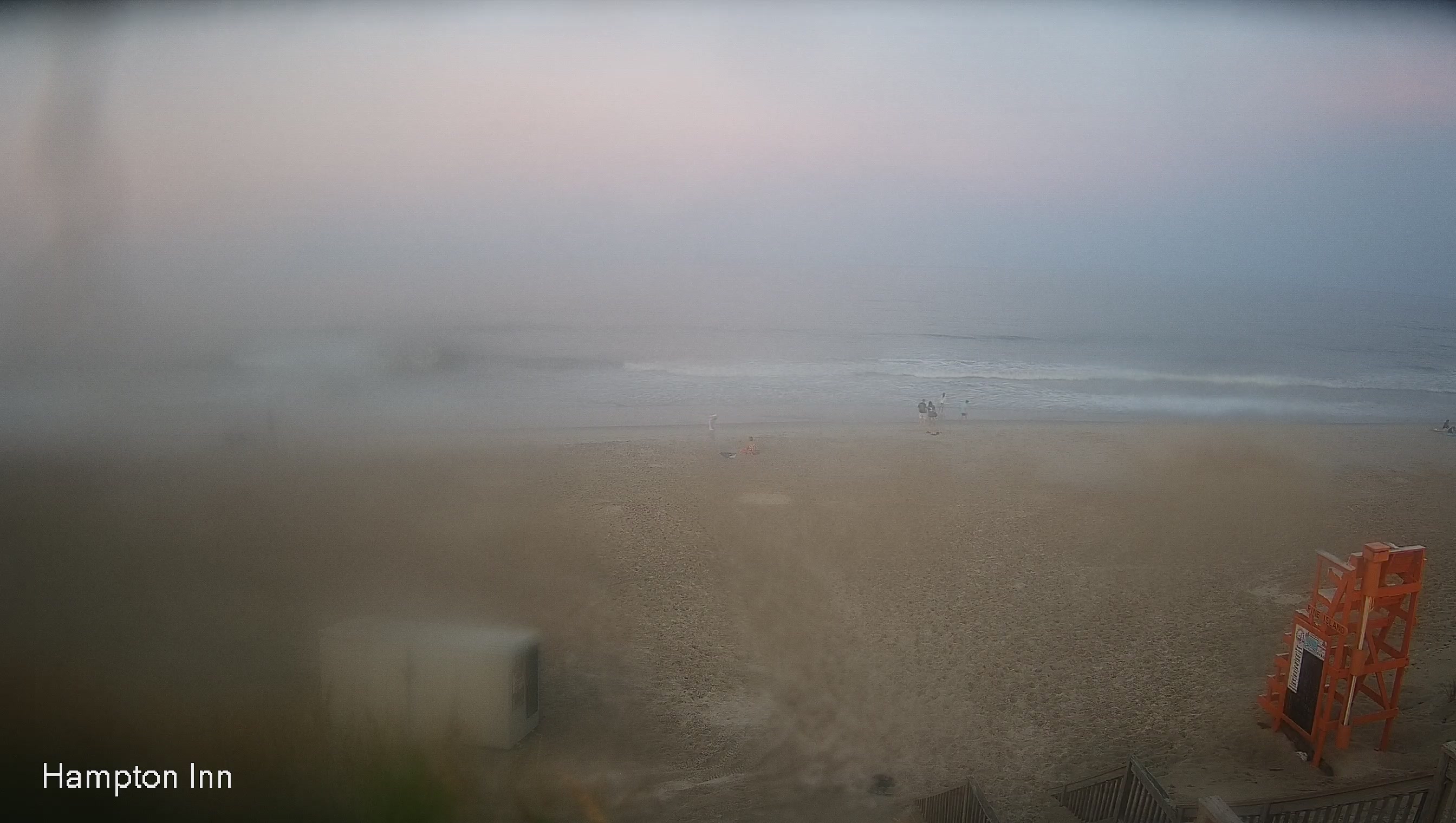 Coastal waters on the ocean and soundside will be too dangerous for swimming at least for the next couple of days, due to the large surf and also the potential for contamination from flood waters.

While the center of Post-Tropical Cyclone Ian will make its way into western Virginia today, temperatures will be in the upper 70s with clearing skies by afternoon.

But the respite will be short-lived, as another coastal low is forecast to bring onshore winds and shower activity starting late Sunday into Monday.

Friday 9 p.m.
The rain and wind is starting to ease across the Outer Banks and northeastern North Carolina, as the center of Post-Tropical Cyclone Ian makes its way further inland tonight.

A sizeable “dry slot” has formed on the east side of the center of circulation, while the heavier precipitation has transitioned farther inland. Overnight, conditions will continue to improve with periods of moderate to heavy rain still possible.

Travel remains less than ideal on the roads this evening, due to rainwater standing in low-lying areas that normally flood from heavy precipitation.

Sand blown on to N.C. 12 on Hatteras and Ocracoke and along the Beach Road has also been common, and drivers should be aware of possible “white out” conditions from blowing sand.

On the oceanside, surf conditions remain hazardous and another period of minor to moderate overwash is expected with high tide around 11:30 p.m.

Coastal waters will likely be too dangerous for swimming at least for the next couple of days, due to the large surf and also the potential for contamination from flood waters.

Unlike areas along the central coast of North Carolina, the soundside of the Outer Banks has mostly avoided any issues with flooding as winds have been blowing out of the north over the last three days.

The forecast change in wind direction and speed will let the water to return gradually and no flooding is expected. That will also allow the N.C. Ferry Division to resume operations.

Friday 6 p.m.
The rain continues to fall and the wind continues to blow from the combination of now Post-Tropical Cyclone Ian and a cold front that is expanding across the Carolinas.

Some areas have gotten more than 6" of rain in the past 24 hours! #ncwx pic.twitter.com/NoM1Q5ZzAu

Wind gusts have reached near 50 mph, with sustained winds of 30-plus through the day.

Standing water from rain has been the main travel issues on roads throughout the region. No major problems from overwash were reported from the morning high tide.

Friday afternoon update: NC12 remains open and passible. There is still sand and standing water in several locations, so if you must go out, SLOW DOWN and drive with extreme caution. Our next high tide is around 11:30 tonight. Pictures are Pea Island, Hatteras and Ocracoke. pic.twitter.com/kIWLMMOy9I

Friday 7 a.m.: The Outer Banks and northeastern North Carolina started seeing the rain overnight, while the wind stayed strong and the waves big for a second straight day as Hurricane Ian nears the South Carolina coast.

Power was knocked out this morning in Frisco, Hatteras village and Ocracoke, likely due to sustained winds that have remained above 25 mph for over the last 24 hours.

Other than blown sand and rain water, the N.C. Department of Transportation has reported no issues along N.C. 12 or other roads this morning.

A first light look at the Pea Island Visitor Center this Friday morning. NC12 is open, with sand and water on the road and windy conditions. Stay home if you can, drive with EXTREME CAUTION if you must. Crews will be out working to clear and shore up dunes. Next high tide at 11. pic.twitter.com/0AXMi6WyFe 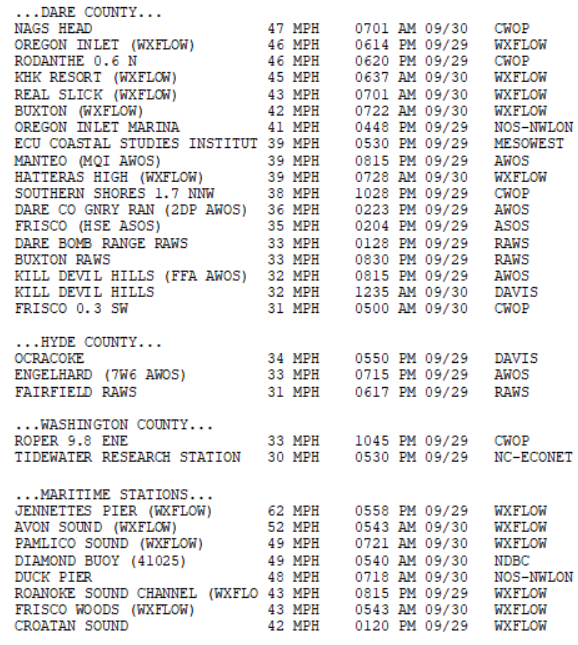 Winds and high surf are making our beach too dangerous for driving, so we are delaying the opening of beach driving season, possibly through Wed.

We'll monitor the conditions and will re-open the beach to driving when conditions improve. pic.twitter.com/QVeheyibmw

A Tropical Storm Warning, Storm Surge Watch and Flood Watch remain in effect for most of eastern North Carolina, including the Outer Banks from Duck southward, and inland sections below the Albemarle Sound. A Wind Advisory is in effect north of the Albemarle Sound into southeastern Virginia.

Minor-to-moderate coastal flooding is expected to last through Saturday, including overwash and beach erosion on the oceanfront and high water along the western shorelines of the sounds and into the coastal rivers of eastern North Carolina.

Up to 8 inches of rainfall is forecast across much of the area, with most of it expected today.

A high risk of rip currents is forecast, and No Swimming flags will be flying along the beaches again on Friday.

“Residents and visitors on the north end of Rodanthe should be ready to protect property from ocean wash especially at high tide,” Pearson said. “Those able to reach visitors in this area please get this message to them.”

The National Park Service said everyone should avoid through the weekend the two-mile stretch of beach between the north end of Rodanthe and South Shore Drive, due to the presence of several vulnerable houses that may be damaged by rough surf and strong winds.

Campgrounds in Cape Hatteras National Seashore remain open but camping conditions are not expected to be favorable over the next several days. Visitors with reservations have been notified of the inclement weather. If the weather forecast worsens, the Park Service said one or more campgrounds may need to be closed until conditions improve.

Visitors to Fort Raleigh National Historic Site are advised to avoid walking through the park’s trails during strong winds due to the potential for tree and tree branch collapses.

No major changes in our impacts. Our biggest concern is flooding, so if you live near the water be sure to know the difference between a Storm Surge Watch and a Storm Surge Warning. Have multiple ways to receive warnings today! #ncwxhttps://t.co/CAZ6pXICRr pic.twitter.com/DJKzxwqclw

Hurricane Ian makes landfall today in SC. Rain will move north today, becoming moderate/heavy this afternoon into this evening. Breezy to windy NE winds increase into this evening (strongest at the coast). A nocturnal tornado threat develops as instability moves N into the area. pic.twitter.com/YYCEweUpBD Ian’s wind and rain field continues to expand as it interacts with a front to our south and strong high pressure over the Great Lakes.

That has created northeast-to-east winds of 25-to-30 mph, with gusts as high as 40, bringing the potential for 1-to-3 feet of above ground oceanfront inundation over multiple tide cycles through Saturday. Ocean overwash is possible especially in areas that experienced a loss of dunes over the past few weeks.

High tide on Friday is around 11 a.m. and 11:30 p.m., and then around noon on Saturday and midnight Sunday.

The prolonged onshore wind will also make 1 to 2 feet of above ground inundation possible on soundside portions of Hatteras Island, while a surge of up to 4 feet is possible along the Pungo, Pamlico and Neuse rivers.

The long duration wind will make ocean conditions hazardous with potential for 10-to-12 foot breaking waves in the surf zone and numerous rip currents.

The tropical moisture pushing into the area will bring periods of heavy rain with 2 to 8 inches of rain possible along with the possibility for tornado activity Friday into the weekend.

All roads remain open, and N.C. Department of Transportation crews have been working to shore up dunes at the trouble spots on Pea Island, between Frisco and Hatteras village and on the north end of Ocracoke Island.

The deteriorating conditions led the N.C. Department of Transportation to suspend all ferry service on Friday., and the Ocracoke Express passenger ended its season two days early.

Travelers are urged to check on their route’s status via the Twitter feeds found on ncferry.org under the heading ‘Current Conditions’, or to phone their route’s terminal office before arriving.

There will be no residential or commercial trash collection on Hatteras Island on Friday. Residents are advised to secure their trash cans during the storm in order to avoid overturned cans and blowing trash. Normal trash collection is anticipated to resume on Monday.

On Saturday, October 1, all soccer and football games have been canceled. Coaches will be notified when the Dare County Parks and Recreation Department has determined a makeup schedule.

Hyde County Government offices are closed today, and a number of local businesses and restaurants have decided not to open or have delayed hours on Friday as a precaution.

Governor Roy Cooper issued a State of Emergency for all of North Carolina that waives the size and weight requirements for vehicles engaged in relief efforts before, during and after the severe weather, including power restoration and debris removal, as well as the transportation of goods like food, fuel, and medical supplies.

The order also helps North Carolina’s agricultural sector by temporarily suspending weighing of vehicles used to transport livestock, poultry or crops ready to be harvested. The Council of State concurred with the waiver of transportation regulations.

“Hurricane Ian reminds us how unpredictable these storms can be and North Carolinians should be prepared when it reaches our state,” Governor Cooper said Thursday.

In addition, North Carolina’s price gouging law against overcharging in a state of emergency is now in effect statewide. And Governor Cooper also authorized the activation of about 80 members of the North Carolina National Guard to assist as needed.