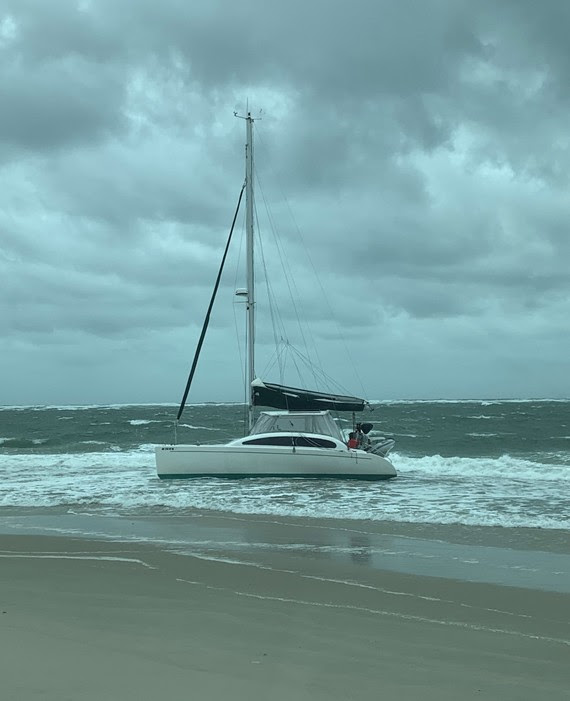 An unoccupied 30-foot catamaran named the Katalyst grounded yesterday afternoon near the north end of Oregon Inlet. Prior to the grounding at Cape Hatteras National Seashore, four people were rescued by the U.S. Coast Guard.

The National Park Service is consulting with the U.S. Coast Guard and working with the owner to have the vessel removed from the beach. Visitors should avoid the area until the sailing vessel is removed in the coming days.

A motor lifeboat crew from Coast Guard Station Oregon Inlet executed the rescue on Thursday in seas of 12-to-14 feet.

The CG 47258 and CG 47251 responded, with the 47258 directly responding to the distressed mariners and the 47251 conducting a bar standby to ensure the safety of the entire evolution. Due to the weather conditions, the mariners anchored the CATALYST outside of the Oregon Inlet Bar and the crew of the 47258 recovered the 4 mariners after they abandoned ship. Midway through the evolution, the anchor line snapped and the CATALYST rapidly began drifting onto the bar. The coxswain expertly maneuvered the 47258 into the surf zone to recover the remaining mariners and proceeded to return to the station.