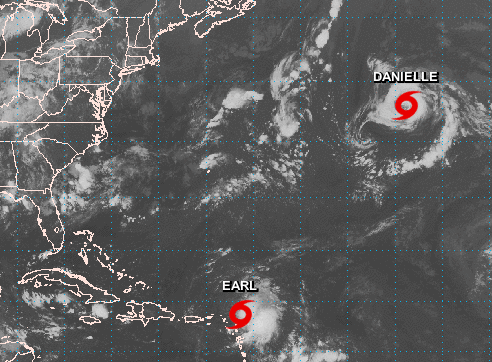 After taking a siesta for the last two month, the 2022 hurricane season has awakened on Friday with Tropical Storm Danielle in the open North Atlantic and now Tropical Storm Earl off the Leeward Islands.

While the uptick in activity comes as we enter the peak time of year for tropical cyclones in the Atlantic basin, neither of the systems is expected to bring any impacts to the Outer Banks.

Hurricane hunter aircraft found that a low pressure system that has been slowly working its way across the Atlantic in a general direction towards the Leewards since last weekend reached tropical storm status Friday night, according to the National Hurricane Center.

Earl is forecast to pass near or just to the north of the northern Leeward Islands, the Virgin Islands, and Puerto Rico over the weekend and bring heavy rains to the islands through Labor Day. Tropical storm force winds are forecast to stay offshore, but could reach the islands with a southward shift by the center.

Some models have indicated Earl could eventually make a northward turn towards Bermuda, but it is not expected to get strong enough or close enough to become a wave and rip current maker along the southeast U.S. beaches.

Danielle weakens after becoming the first hurricane of 2022

Danielle became a tropical storm on Thursday, breaking a near-record 60 day streak with no named storms, Danielle then strengthened to hurricane status on Friday and then back to a tropical storm Saturday morning.

It is forecast to sit-and-spin about around 900 miles west of the Azores into early next week and could once again become a hurricane.

No other areas of tropical development are currently begin monitored in the Atlantic, according to Friday night’s update from the National Hurricane Center.

The 60-day streak without a named storm that was broken on Thursday is the second longest in history, behind the 61 days in 1999, thanks to a combination of weather factors over the Atlantic Ocean this summer.

Instead it has looked more like this (again this is idealized, not exact). High over anomalously warm N. Atlantic, with a meandering jet stream allowing for what meteorologists call wave breaking – helping to inject wind shear and dry air into the tropics. A hostile environment.. pic.twitter.com/8QOrrLDEe1

A period of onshore winds that will continue the next couple of days has increased shore break, and a moderate risk of rip currents is expected along most of the Outer Banks on Saturday.