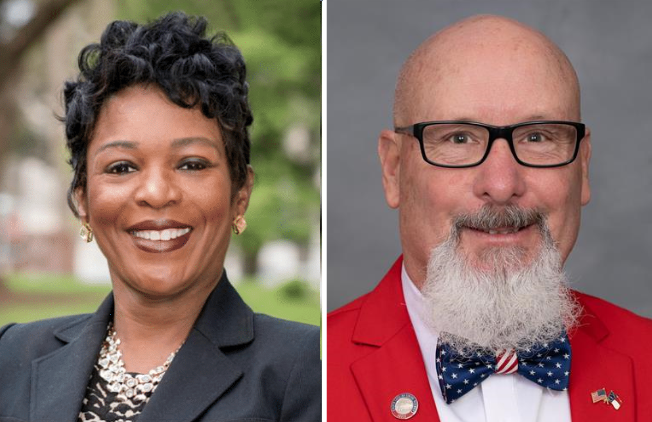 UPDATED, Friday Sept. 2, 4:30 p.m. In a 3-2 ruling, the State Board of Elections has ruled that Democrat Valerie Jordan can stay on the November ballot after a protest of her residency in the Third Senate District by her opponent, state Sen. Bobby Hanig (R-Currituck).

Hanig was sworn in Monday as the new First District senator, and the first from Currituck County since the 1930s, after he was nominated to replace Sen. Bob Steinburg (R-Chowan) who retired at the end of July. Hanig will serve out the remainder of Steinburg’s term that ends Dec. 31.

While saying there was substantial evidence presented that Jordan does not live in the Third District, the Currituck Board of Elections last week voted 3-2 to forward their findings to the N.C. Board of Elections for a final decision.

The ruling to overturn Currituck’s decision following Jordan’s appeal was split along party lines, with the three Democratic appointees voting in Jordan’s favor.

In an emailed statement to the News and Observer, Jordan said Friday that she was “grateful” that the state board affirmed her residency in Warren County and called Hanig’s protest “political theater.” “As I have said before, Warren County is my home, and I am proud of the deep roots that my family and I have here. I’m glad that Bobby Hanig’s political theater is behind us now, and I look forward to continuing to talk to voters in this district. They deserve a leader who will fight for them, not someone who wastes their time playing politics,” Jordan said.

“This was window dressing made to look like a nonpartisan fact-finding board meeting,” Hanig said in a statement. “Once again, the Democratic majority on the board decided politics was more important than the rule of law.”

“It was evident they made their decision before the hearing even began,” Hanig said. “And, people wonder why they do not have faith in the elections process! It is because of shams just like this.”

“This decision was all about partisanship,” Hanig said. “And Governor Roy Cooper is to blame since he told the press recently that ‘nothing will come of this.’ The citizens of District 3 and of North Carolina deserve better.”

Hanig said in an interview with WRAL-TV after the state board’s decision that he hasn’t yet decided whether to pursue the election protest in another venue, such as the court system.

The race is considered key to the GOP’s efforts to regain a super majority in the General Assembly, and has already drawn the attention of outside groups who have been sending numerous mailers to voters in the Third District over the last two weeks.

Hanig filed his protest in early August, claiming Jordan lives in Raleigh and not Warrenton and that she be removed from the ballot.

The protest filed by Hanig with the Currituck County Board of Elections called for a subpoena of records that would establish Jordan’s permanent residency.

Jordan said she lives at an address in Warren County, though online records show she voted in Wake County as recently as the November 2020 election before changing her voter registration to Warren County after that.

In his protest, Hanig claimed “for a three-week period in July and August 2022…Jordan’s vehicle was photographed in the driveway at her home on 23 consecutive mornings”; that as recently as last fall she made political contributions listing Raleigh as her primary residence; that she owns multiple properties in Warren County while tax records list Jordan’s home address in Raleigh for her contact information; and that as a member of the state Transportation Board her official biography on the NCDOT website has Raleigh listed as her “long-time” hometown.

Earlier this week, an attorney representing Hanig asked the state board not consider Jordan’s appeal of the Currituck decision due to a late filing.

The board unanimously rejected Hanig’s request and considered the evidence Jordan provided, which included tax documents and voter registration records listing a Warrenton address where she claimed to have lived since December.

During the state hearing held online on Friday, an attorney representing Jordan said she had been staying in Raleigh to help care for her granddaughter while also making it easier at times to commute to her job.

While the rest of the state’s November ballots have started to be printed, those in the 10 counties of Senate District 3 – Warren, Halifax, Northampton, Martin, Bertie, Hertford, Gates, Tyrrell, Camden and Currituck – have been delayed. according to The News and Observer.

North Carolina statutes require a candidate to live in a district for one year before an election, which means she had to reside in Warrenton since Nov. 8, 2021.