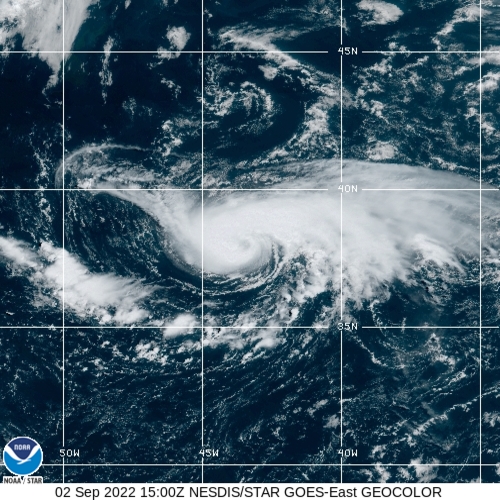 Danielle becomes first hurricane of 2022 in North Atlantic, no threat to United States

Danielle became the first hurricane of 2022 on Friday as it meandered in the North Atlantic Ocean, while an area of disturbed weather off the Leeward Islands continues to show signs it could soon become a tropical cyclone.

After becoming a tropical storm on Thursday, breaking a near-record 60 day streak with no named storms, Danielle is forecast to sit-and-spin about around 900 miles west of the Azores into early next week and could reach near major strength with winds nearing 115 miles per hour. Meanwhile, an area of low pressure several hundred miles east of the Leeward Islands is showing some signs of increased shower and storm activity.

It could develop into a tropical cyclone, then move up the Atlantic just close enough to create increased surf and rip current activity along the Outer Banks next week.

“Although environmental conditions are only marginally conducive, any additional development of the system over the next few days would lead to the formation of a tropical depression,” according to the National Hurricane Center.

An Air Force Reserve Hurricane Hunter aircraft is scheduled to investigate the system this afternoon.

Another area of disturbed weather off the Cape Verde Islands in the Tropical Atlantic is showing lesser signs of becoming a tropical cyclone over the next five days.

The 60-day streak without a named storm that was broken on Thursday is the second longest in history, behind the 61 days in 1999, thanks to a combination of weather factors over the Atlantic Ocean this summer.

Instead it has looked more like this (again this is idealized, not exact). High over anomalously warm N. Atlantic, with a meandering jet stream allowing for what meteorologists call wave breaking – helping to inject wind shear and dry air into the tropics. A hostile environment.. pic.twitter.com/8QOrrLDEe1

A period of onshore winds over the next couple of days could lead to an increase in shore break and the risk of rip currents along the beaches.