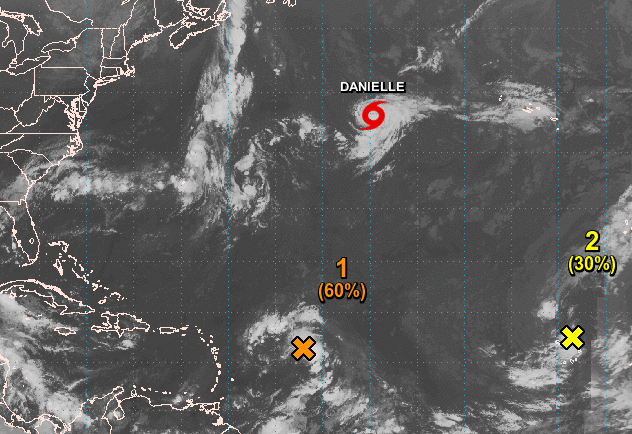 There has been an uptick in activity over the past few days, with Tropical Storm Danielle forming in the far North Atlantic and two other areas of potential development that are being watched as we reach the traditional peak of the season.

None of the systems are forecast to reach the United States at this point, although one area could develop into a tropical cyclone and pass close enough to create increased surf and rip current activity along the Outer Banks next week.

Klotzbach said on Twitter earlier this week that despite warm sea surface temperatures in the Tropical Atlantic and another robust La Nina pattern of cooler water in the Pacific, other factors such as “robust tropical upper-tropospheric trough and associated increases in vertical wind shear in the Caribbean/central tropical Atlantic” may have helped suppress activity so far.

The second-longest streak in history of no storms has now ended at 60 days, as the National Hurricane Center began issuing advisories Thursday morning for Tropical Storm Danielle, located about 1,000 miles west of the Azores. It is forecast to become the first hurricane of 2022, but Danielle is not expected to be a threat to land as it essentially spins around in one place for the next few days.

Happy first day of *meteorological* fall! And what more fitting of a way to start the season than w/ a new Tropical Depression? As of 5am, TD Five has formed in the North Atlantic. Luckily, no direct impacts to the US are expected. Visit https://t.co/eK56eEQUV3 for the forecast. pic.twitter.com/qsAvgUZt1y

An area of disturbed weather east of the Leeward Islands continues to show signs it could become a tropical depression over the next couple of days.

“Although environmental conditions remain only marginally conducive, any additional development of the system over the next few days would lead to the formation of a tropical depression,” according to the National Hurricane Center. “The disturbance is forecast to move slowly west-northwestward, toward the adjacent waters of the northern Leeward Islands.”

Models indicate that system could move through the Atlantic Ocean towards Bermuda late next week, and depending on how close it gets to North Carolina will dictate how much wave activity reaches our coast.

Another system in the eastern Tropical Atlantic could also become a short-lived storm, although conditions for further development are expected to become less favorable this weekend.

A period of onshore winds over the next couple of days could lead to an increase in shore break and the risk of rip currents along the beaches.