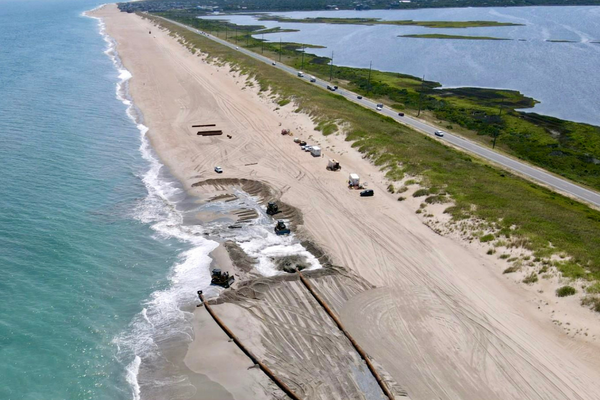 Great Lakes Dredge & Dock Co. has announced that the last load of sand for the 2022 Buxton beach nourishment project was placed at approximately 7 p.m. on Tuesday, August 16.

The dredge Liberty Island delivered the last load approximately 1.2 miles north of the northern boundary of the Village of Buxton. The total contract volume of 1.2 million cubic yards has been completed after approximately 50 days of construction.

Great Lakes Dredge & Dock Co. used America’s largest dredge, the Ellis Island, to begin the Buxton project on June 30. The Ellis Island worked in Buxton for a total of 17 days and placed approximately 668,000 cubic yards of sand along the shoreline. This volume is equivalent to approximately 56 percent of the total project volume.

The second dredge, Liberty Island, started pumping sand in Buxton on July 26, after completing the Avon beach nourishment project. During nearly 20 days of working in Buxton, the dredge was able to place approximately 532,000 cubic yards of sand. This volume is equivalent to approximately 44 percent of the total project volume.

Over the next few days, Great Lakes Dredge & Dock Co. will remove the landing point, the shore pipes and the equipment from the beach and store them in the designated staging area near the Buxton beach access.

The contractor estimates that all equipment will be transported out of the area by truck over the next two weeks.