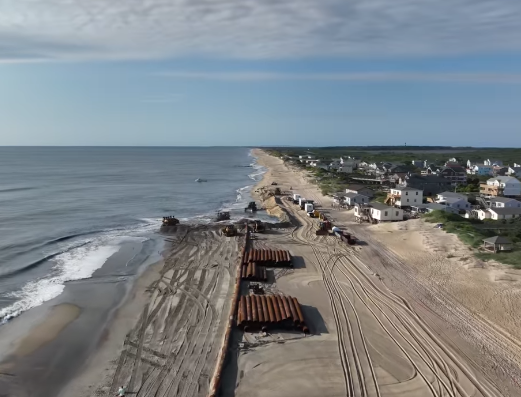 The southern end of this year’s Nags Head beach nourishment project is already finished, with work moving up the beach in South Nags Head later this month.

Work has been completed from the 9400 to 10400 blocks of South Old Oregon Inlet Road. That’s near mile post 19 and James Street to mile post 21 and the Cape Hatteras National Seashore border.

According to an update released by the Town of Nags Head on Wednesday, a second dredge will arrive around mid-to-late August and construction will begin near the 8700 block, then move south to the 9400 block over about seven days.

Construction will then return to the 8700 block and move towards the northern border of the project area near Whalebone Junction and should be completed by early September.

Town officials note that it is likely the schedule will change over the course of the project, and oceanfront properties and public beach accesses along South Virginia Dare Trail from Jennette’s Pier northward will not be impacted.

Beach Access and Lifeguard Stand Changes Due to Beach Restoration

The Gulfstream public beach access will be used for equipment staging and will be closed to both pedestrian and vehicular traffic from about mid-August through early September.

Equipment is being removed from the Juncos public beach access. The access should be re-opened to vehicles and pedestrians about August 17.