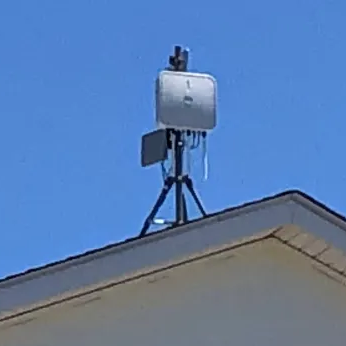 by Sam Walker
August 4th, 2022
By Connie Leinbach, OcracokeObserver.com
Two communications outages in the spring that knocked out internet cell service and phone land lines got some locals rattled enough to rally.

Those outages, reported online at http://www.ocracokeobserver.com, resulted when fiber cables were accidentally cut during repairs in two different locations in Dare County.

Ocracoke’s county commissioner, Randal Mathews, was among those who were concerned about losing the ability to call 911 in these situations.

“The landline is our lifeline,” Mathews said, adding that fiber optic cables are buried several feet underground. “The fiber optic cable is buried deep enough so that pushing sand around or whatever is usually not an issue.”

But it was an issue as NCDOT workers severed these cables while moving sand around near Mirlo Beach after extended nor’easters in May overwashed NC 12.

After these events, Mathews and others investigated a new company that’s offering wireless service so that if fiber cables are accidentally severed, the island isn’t entirely without communication.

Wireless service from Tekniam, based in Lenexa, Kansas, is now in a trial stage in a small area of Ocracoke village. If the trials in this first phase are successful, Tekniam will be a third internet choice for islanders following CenturyLink and Starlink services.

In this pilot project, distribution modules have been installed in five businesses operating immediately adjacent Irvin Garrish Hwy., extending from the Community Center to Silver Lake Drive, and to the Back Rd. and Sunset Drive intersection.

These are hidden networks now during this trial phase, Mathews said, so it’s not open to the public.

The businesses in the trial are trying out this technology for their point of sales devices, he said. It’s not for video streaming.

Hyde County is using $100,000 it received from the American Recovery Program Act to match CenturyLink’s fiber expansion in Swan Quarter and Engelhard. But the rest of Hyde County mainland may not benefit because of the expense these companies incur to lay fiber cable through large distances.

Moreover, the companies can’t install new cable on Ocracoke because of the logistics involved in laying new underground cables throughout the village.

Because it is wireless, Tekniam’s new technology would be perfect for a small area like the village of Ocracoke.

“This is the pilot project for Tekniam,” Mathews said. “They want this to work so they can show it and demonstrate this technology.”