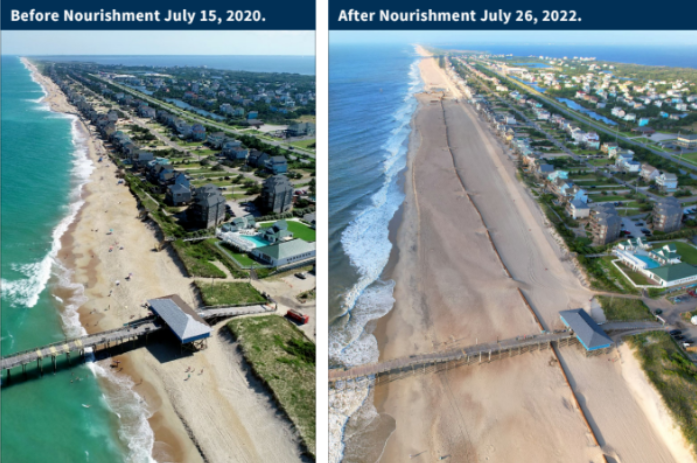 The first-ever beach nourishment project off Avon has been completed, while sand pumping has resumed along the beaches off Buxton.

Great Lakes Dredge and Dock Co. has announced it completed the placing 1 million cubic yards of sand Tuesday night along approximately 2.5 miles of oceanfront from Due East Road to the southernmost boundary of Avon near National Park Service ORV Ramp 38.

The contractor also constructed a new, 6-foot tall frontal dune south of the Avon Pier and the newly nourished beach was graded, smoothed and reopened to the public Wednesday morning.

Equipment demobilization began immediately after the last load of nourishment sand was placed on the beach and is ongoing. Equipment and shore pipes will be transported through ORV Ramp 38 and leave Avon over the next two weeks.

Buxton
The dredge Liberty Island returned to the waters off Buxton on Thursday after a brief trip to Norfolk for repairs, maintenance and refueling.

Pumping operations resumed in front of Ocean Drive at 11:11 a.m. and proceeded north. Construction will continue to progress north from the current landing point located near the south end of Tower Circle until the northern limit of the village of Buxton is reached.

As of July 28, 2022, Great Lakes Dredge and Dock Co. has placed over 410,000 cubic yards of sand along 3,000 feet of oceanfront in Buxton. This volume is equivalent to approximately 35 percent of the total project volume.

The 1.2 million cubic yard beach renourishment project is expected to be completed by mid-to-late September.