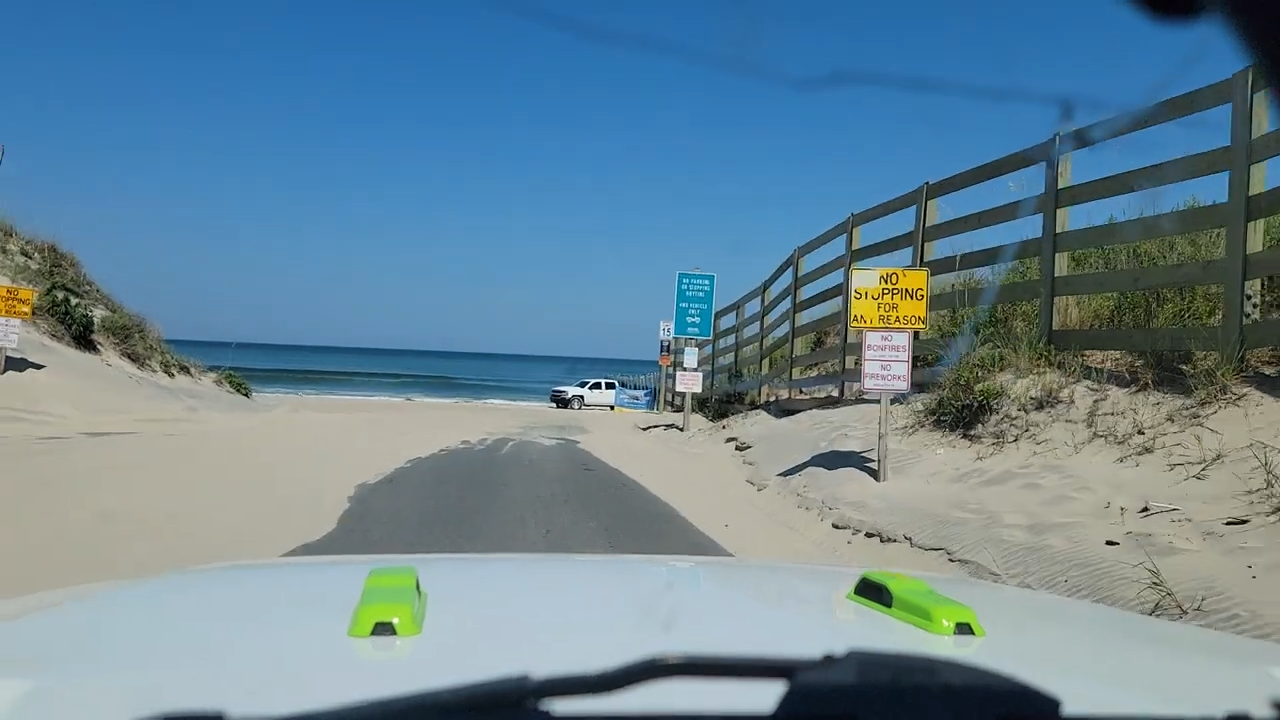 Currituck County has initiated discussions with state and federal officials about possibly moving the off-road vehicle ramp above Corolla to a location farther north as well as increasing pedestrian access to the beach north of the village.

County Manager Ike Mcree said during the Currituck Board of Commissioners meeting on Monday that talk about moving the vehicular beach access near the northern terminus of N.C. 12 is in the very early stages.

“Movement of the North Beach Access Ramp creates an additional length of beach without motor vehicle traffic interacting with those recreating on the beach,” said Currituck County spokesperson Randall Edwards.

“It is also the county’s desire to locate a day use facility and parking for those accessing the additional motor vehicle free beach,” Edwards said.

The northern beach ramp is one mile north of Corolla village.

The ramp is notorious for even the most experienced beach drivers getting stuck, especially during hot, dry weather which causes the sand to become the consistency of sugar.

And it is where drivers find out that nearly all cars, and vehicles that don’t have true four-wheel drive, are incapable of being driven on an Outer Banks beach.

Parking, and even stopping to “air-down’, is not allowed because the right-of-way is so narrow between private and state-owned properties.

And there is a fence along the beach that runs parallel to the ramp and pavement, then crosses at the end of N.C. 12, to prevent the Corolla wild horses from wandering south.

Multiple sources tell WOBX there have been informal talks over the last two years about creating a day-use area, parking lots and even a bathhouse in the area beyond the ramp’s current location.

And there have even been some mentions of restricting who can access the four-wheel-drive areas north of Corolla up to the Virginia state line.

Free, open access to the four-wheel drive area for vehicles is allowed because it is the only way to reach the communities north of Corolla village, including Swan Beach and Carova Beach.

But to try and limit the number of vehicles driving on the beach during the busy visitor season, the county now requires permits to park on the beach from late April through early October.

County residents and property owners get free permits from Currituck, while weekly permits for all others cost $50 and are limited to 300 passes each week.

Different permits are required to drive on Cape Hatteras National Seashore beaches year-round and the Kill Devil Hills and Nags Head beaches during the off-season.

There are three separate tracts of land that compose the roughly 1.5 miles of maritime forest and dunes between the current ramp location and Swan Beach.

The southern parcel running from ocean-to-sound is owned by the State of North Carolina and is part of the Currituck Banks Reserve. The Nature Conservancy has a small section in the middle, with another large tract owned by Currituck County on the northern end.

Vehicles are not allowed to park along that area of beach to allow safer travel. Farther to the north, vehicles can park up along the shoreline for the next several miles, but then are required to maintain space in the middle between the ocean and dunes.

“To advance the county’s goals, county staff is initiating conversation with state officials about the possibility of exchanging county-owned property received from U.S. Fish and Wildlife for state-owned property,” Edwards said.

“It’s a great idea, but ultimately its going to come down to enforcing the laws we have,” said a local resident who goes by the moniker “Corolla Beach Cletus”.

Beach driving ordinances on the Currituck Banks include require vehicle operators to reduce air pressure in their tires, driving only 15 mph near pedestrians and the Corolla wild horses, and staying close to the dunes in certain areas.

Cletus and others who live in the four-wheel drive area support moving the ramp and also the additional beach access, especially for those who do not have off-road vehicles.

“It’s going to alleviate a lot of issues for people getting stuck, that’s what we’d really like to happen,” Cletus said. “Then the beach is a much better place for everyone. It gives us safer access to our homes, and ultimately it’s a safer environment for the horses as well.”

But when those changes and improvements happen is probably still face a slow journey.

“This is in the initial stages and nothing has been agreed to yet as of this time,” Edwards said.