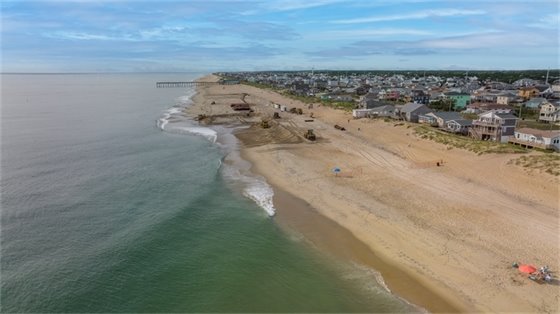 A pair of Outer Banks beach nourishment projects are already nearing their completion, while a third has reached the quarter pole.


The beach nourishment project which began in Kill Devil Hills on June 13, is nearing completion.

Weeks Marine anticipates finishing the Kill Devil Hills section next week, according to Friday’s update from the town.

Although work may be finished in Kill Devil Hills, the staging area at Helga Street as well as pipes and other equipment at Walker Street will still be present as the construction begins in the Town of Kitty Hawk.

Once contractors can get far enough into Kitty Hawk, they will move all of the pipes and equipment there. This is expected to occur at the end of this month.

Active construction and staging areas will be marked and secured with fencing and ribbon to form a protective barrier.

Please avoid the active construction zones and obey all directions from their safety personnel. Due to the potential hazards to the public that are presented by heavy equipment and construction activities, these areas will also be monitored 24/7 by security personnel.

Great Lakes Dredge & Dock Co. has announced that significant progress has been made on the Avon beach nourishment project since pumping resumed on July 8.

Over the past week, the dredge Liberty Island placed approximately 180,000 cubic yards of sand along the beach in Avon to nourish another 4,000 feet of the oceanfront.

Pumping approached the northernmost project boundary at Due East Road the morning of July 15.

The crew plans to move most of the equipment and shore pipes to the south side of the Avon Pier this afternoon, where pumping will resume and proceed south to tie in with the nourished section of beach near Pampas Drive. Great Lakes Dredge & Dock Co. estimates that the last 3,000 feet of nourishment work is expected to take 7-to-10 days to complete.

While waiting for the crew to clean up the newly completed beach, the Liberty Island will sail downcoast to assist the dredge Ellis Island in the Buxton nourishment project for a short period of time.

Moving forward, Great Lakes Dredge & Dock Co. may switch dredges between Avon and Buxton to reach the optimal production rate and achieve the best overall results for both projects.


As of Friday, July 15, the contractor, Great Lakes Dredge & Dock Co., has placed approximately 300,000 cubic yards of sand along the Buxton oceanfront, equivalent to 25 percent of the total project volume.

Approximately 2,500 feet of the beach from Tower Circle to the ocean groin field near the original location of the Cape Hatteras Lighthouse has received nourishment sand. Pumping is currently proceeding north.

Coastal Science & Engineering—which is tasked with managing the beach nourishment project that is being performed in Buxton by Great Lakes Dredge & Dock Co.—has released its first newsletter announcing the latest updates on the project.