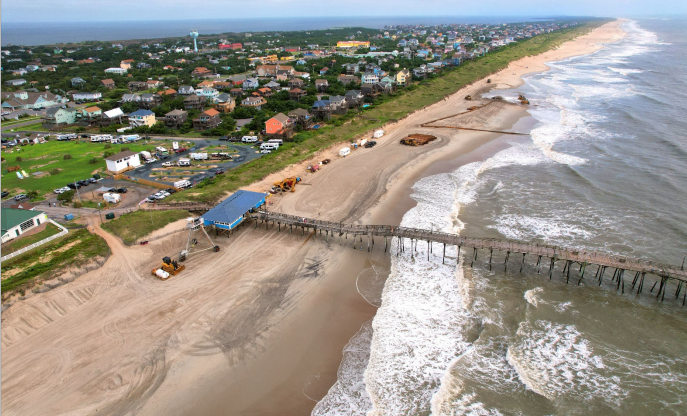 Work on the South Nags Head beach nourishment project has been tentatively scheduled to begin next week, while sand pumping off Buxton has shifted northward and the Avon project has reached its halfway point.

Oceanfront properties and public beach accesses along South Virginia Dare Trail will NOT be impacted.

Buxton
Great Lakes Dredge & Dock Co. has announced that steady progress was made over the weekend for the beach nourishment project that is currently underway in Buxton.

Nourishment of the southern section of the shoreline—from the landing point located at the south end of Tower Circle to the ocean groin field near the original location of the Cape Hatteras Lighthouse—is expected to be completed this evening (Monday, July 11, 2022).

As of Sunday, July 10, 2022, the volume from the Liberty Island combined with the amount placed by the first hopper dredge, the Ellis Island, from June 19–29, 2022, totals over 50 percent of the project volume (i.e., 500,000 cubic yards out of 1 million cubic yards). Over one mile of the Avon oceanfront has been nourished, and another approximately 1.5 miles needs to be completed.

Coastal Science & Engineering—which is tasked with managing the beach nourishment project that is being performed in Avon by Great Lakes Dredge & Dock Co.—has released its second newsletter announcing the latest updates on the project.