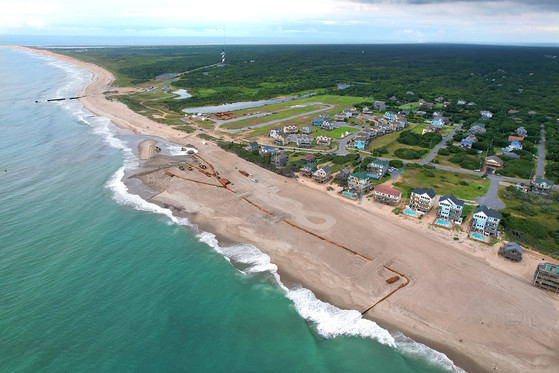 Over the weekend, crews would be heading south for 800 feet through Avon Pier and then reposition the pipe in order to pump sand toward the northern project boundary near Due East Road.

Due to predicted high sea conditions this weekend, dredging operations may be paused for extended periods to ensure the crew’s safety.

With the flexibility of having both the Ellis Island and the Liberty Island on site in Dare County, Great Lakes Dredge & Dock Co. may switch dredge assignments between Buxton and Avon to achieve optimal production for each project.

Cape Hatteras National Seashore’s off-road vehicle Ramp 38 will remains open, but visitors with beach driving permits can expect some intermittent, short-term delays entering and exiting the ramp as beach nourishment equipment is moved safely to and from the beach.

Oceanfront properties and public beach accesses along South Virginia Dare Trail will NOT be impacted.

Kill Devil Hills/Kitty Hawk
Work is continuing to proceed north between Sothel and Wilkinson streets, and is expected to reach the KDH/Kitty Hawk town line as early as next weekend.

Beach nourishment staging is currently underway in Kitty Hawk, with construction estimated to begin in the second half of this month.