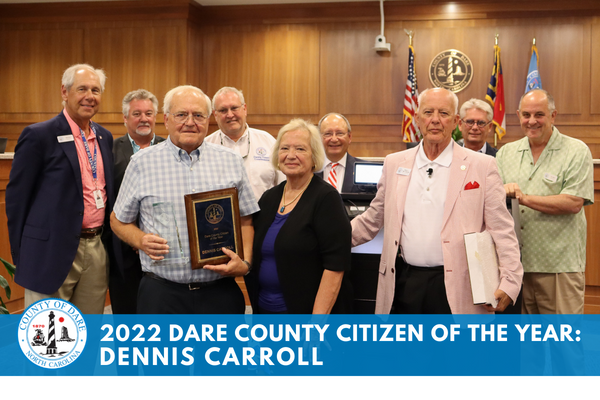 During the presentation highlighting Carroll’s extensive volunteer service with the Hatteras Island-based organization, Woodard noted that the decision to declare him as the 2022 Dare County Citizen of the Year was made unanimously by the Dare County Board of Commissioners.

“When I reached out to the board as to who they felt was deserving of this [award], with every single board member this name came up,” said Woodard. “He’s a beacon of hope and helping hands for people on Hatteras Island. Over the years, he has served in many different volunteer capacities, but most notable is his leadership role as president of the Cape Hatteras United Methodist Men.”

Founded in 1978, the Cape Hatteras United Methodist Men is a group of men and women volunteers who work alongside various relief organizations, state and federal government agencies, local businesses, and church groups to assist those in need on Hatteras Island. The organization is funded by contributions from individuals, businesses, and other entities, and 100 percent of all donations are used to assist area residents.

Since it was established 44 years ago, the Cape Hatteras United Methodist Men have fed more than 19,000 people and spent more than $2 million assisting members of the Hatteras Island community by fixing damaged roofs, replacing siding, repairing flood-damaged floors, eradicating mold, building wheelchair ramps, replacing insulation, buying medicine, and helping to fund emergency medical and dental care, as well as helping many in the community to keep their lights and heat on during times of need.

“These estimates don’t include just money but also hundreds of thousands of hours of dedicated volunteer service,” said Woodard. “As the leader of the Cape Hatteras United Methodist Men, Dennis is known for his kindness, his compassion, and his willingness and ability to put himself in the position of others to find solutions for the struggles they are facing.”

Woodard also noted that Carroll is “known for his professionalism, respect for others, and extensive efforts to ensure the organization he leads works successfully with other organizations in our community.”

“It’s through these partnerships that Dennis makes it possible for all of these organizations throughout Dare County to come together and find not only common ground but a shared vision and solutions to the challenges that many in our community face,” said Woodard.

As part of the 2022 Citizen of the Year award presentation, Dare County Commissioner Danny Couch, who represents Hatteras Island, highlighted one of the most significant projects the Cape Hatteras United Methodist Men have recently undertaken: elevating numerous mobile homes on Hatteras Island above sea level.

“The past 18 months—because FEMA will not raise mobile homes, which are personal property—we undertook a project that could not have been done without the aid of the Outer Banks Community Foundation where 14 mobile homes were raised nine feet above sea level, which allowed them to get out of the floodplain,” said Couch.

Couch continued by recognizing the profound and positive impact that such projects have had on Hatteras Island residents over the years thanks to the leadership role Carroll plays as president of the Cape Hatteras United Methodist Men.

“It’s very emotional for me to get up here and talk about it because when you see families with kids, and they’re working two and three jobs just trying to make it every day, it’ll rip your heart out,” said Couch. “And a project like that—even if it’s a mobile home—with three bedrooms, a 60-footer is still going to [cost] about $48,000 to $52,000. Because of Dennis’ leadership, we were able to get those done for about $19,000—essentially half. It’s Cape Hatteras United Methodist Men because that’s what the charter was in, but we’ve got men, women, and teenagers, and it’s just a real testimony to what a community can do when they resolve to act in an endeavor as one.”

As the presentation concluded, Woodard presented Carroll with a special plaque in recognition of his many years of service and dedication to the Dare County community.

“It’s my honor—on behalf of this board who unanimously selected you, Dennis—to recognize you as this year’s 2022 Dare County Citizen of the Year,” said Woodard. “It’s a better place because of you. Your work, and that of all of those who work alongside of you, is making a profound difference in so many lives, and we are abundantly grateful for all that you do.”