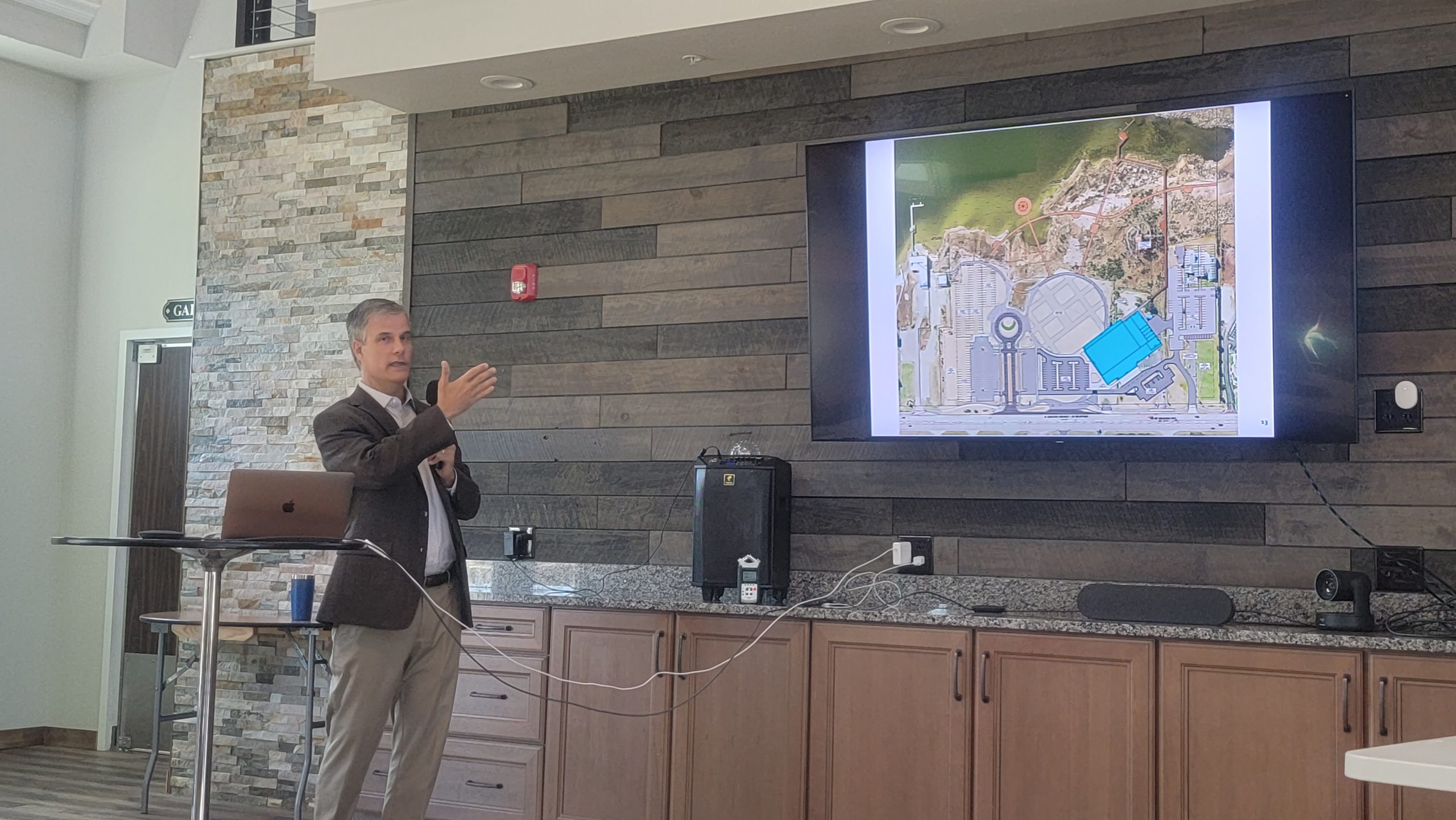 Several dozen members of the local community, ranging from members of the hospitality industry and even a number of pickleball enthusiasts, attended the first public meeting on the Outer Banks Event Center proposed for The Soundside event site in Nags Head.

The center would cost $18 million according to an estimate received in the fall of 2021, with the Tourism Board already having a dedicated line-item within its budget to fund expenses.

A variety of funding options would be explored to pay for it. A bulk of that would likely come from the county’s occupancy tax fund, which is paid for through the 6 percent tax charged on hotel/motel rooms and vacation home rentals.

Nettles was up front that the center would likely operate at a loss, with estimates by year five of a $312,000 deficit.

But that the analysis of the center also said it will generate approximately $25 million in new spending annually across the Outer Banks, an additional 14,000 additional room nights for lodging providers and support 191 new jobs in the community.

There are a number of hurdles that must still be cleared before construction could begin, including full architectural designs, working with the Town of Nags Head on zoning variances, permitting at the state level and other matters.

An optimal construction timeline would be at least three years, according to Nettles.

Nettles said a panel of local government leaders and representatives from the visitor economy industry was tasked with developing a concept for a building that could host more than 300 people.

The advisory committee then “worked backwards” to determine the type of building that would meet the needs of a variety of events that would boost visitation during the shoulder and off seasons while also serving the local community.

Rough sketch plans for the complex were first announced in July 2021 for a facility that would include a 26,000 square foot main hall for concerts, sports, small trade shows and other events in a flexible design that can host up to 2,500 people.

A kitchen area would be designed to service needs of events in the center.

Nettles reviewed much of the information on the proposal that’s available on the Outer Banks Visitors Bureau’s website at https://www.outerbanks.org/partners/event-center-faq-and-support/.

He also pointed out some specific ideas for the design came from events that already take place on the Outer Banks, but unable to fully offer programming due to the limits of currently available indoor spaces.

One example was the annual OBX Rod & Custom Festival, which would like to host displays of supercars, but needs a facility inside to “drive-in” and show vehicles valued at $1 million-plus.

Another example shared Monday is the continuing growth of pickleball, which is commonly played outdoors but can be hampered by the ever-present wind on the Outer Banks.

With Dare County’s recreation facilities already maxed out in their ability to host indoor sports, Nettles pointed out the event center would be a welcome addition for a variety of sports.

“We intend to compliment and extend the Parks and Recreation centers’ offerings and facilities,” Nettles said.

During the question-and-answer session, concerns were expressed about the types of events that may shift from privately-owned facilities to the publicly-operated center.

Nettles said there would be consideration of pricing the event center’s rental fees in a way that would discourage it being used for gatherings smaller than 300 people.

“Events are outgrowing what’s already available here, we want to be able to fill in the gap for events that can draw up to 2,500 people,” Nettles said.

Another question was about the center causing added pressure on the Outer Banks’ already limited infrastructure, including public safety.

Nettles said events being held in June, July and August would have to be “self-contained”, similar to what’s already done at The Soundside event site so as to not create “additional pressure” during the summer.

“70 percent of our occupancy collection takes place from June to August,” Nettles said. “Our goal is for the Event Center to grow the shoulder and off-season.”

He said that bringing events in those other 9 months will make it more viable for more local employers to keep workers on year-round rather than seasonal.

Cafferty said when The Soundside event site was first proposed, concerns were raised about it being a “white elephant”. He said adding the Event Center will only boost its use even further.

“We want to see it a beehive of activity, cars in front of that every single day, doing something,” Cafferty said.