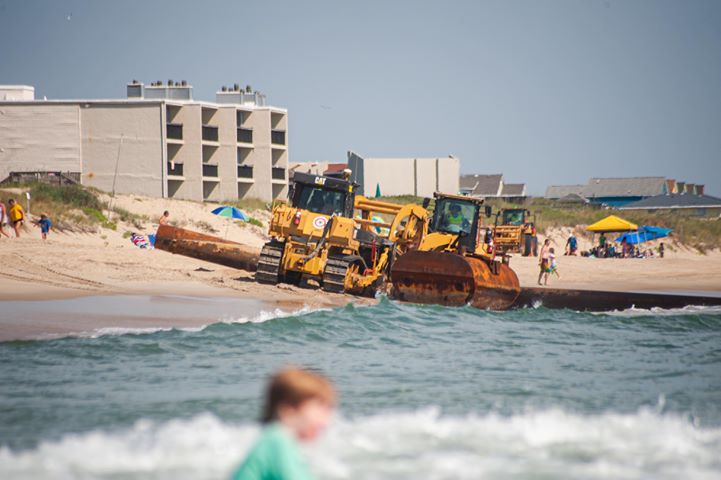 This year’s beach nourishment projects along the northern Outer Banks towns and Hatteras Island will be getting started in just a matter of weeks, as equipment is arriving from a pair of contractors that are familiar with widening our beaches.

The Town of Kill Devil Hills announced equipment staging would start Tuesday at Fifth Street, when Weeks Marine started placing distribution pipeline and heavy equipment at key locations along the oceanfront ahead of the arrival offshore of the dredges and tugs.

The Kill Devil Hills portion of the project is anticipated to last approximately 25-35 days, will start around First Street and move south then turn back north. This is subject to change by the Weeks Marine at any time.

The estimated start dates that have been announced are tentative and remain subject to change due to a variety of factors, including weather conditions, mechanical equipment issues, and other variables.

Great Lakes Dock and Dredge is the contractor for the South Nags Head, Avon and Buxton projects, while Weeks Marine will be working along Duck, Southern Shores, Kitty Hawk and Kill Devil Hills

Beach nourishment in other coastal areas usually takes place in the offseason. But storms that frequently affect the Outer Banks in late fall, winter and early spring can cause dangerous conditions that prevent the dredges and other boats from operating just offshore safely.

Pipes are required to pump the sand to the beach and bulldozers also operate in the surf to distribute the sand and can be damaged or destroyed by large waves that are more common outside of summer.

The Duck, Southern Shores, Kitty Hawk and Kill Devil Hills and Avon projects are being paid for using a combination of funding set aside for beach nourishment from the county’s occupancy tax on hotel/motel room and vacation property rentals, along with a portion of property taxes assessed in the towns and village that have been designated to beach nourishment.

The total cost for those projects will be around $46.6 million.

Grants from FEMA and the state, along with money from the local beach nourishment reserve fund, are subsidizing the South Nags Head and Buxton projects, and totals approximately $29.8 million.

The sand lost from previous beach widening along those areas was determined to have been caused by recent hurricanes and were eligible for federal and state disaster relief funds.